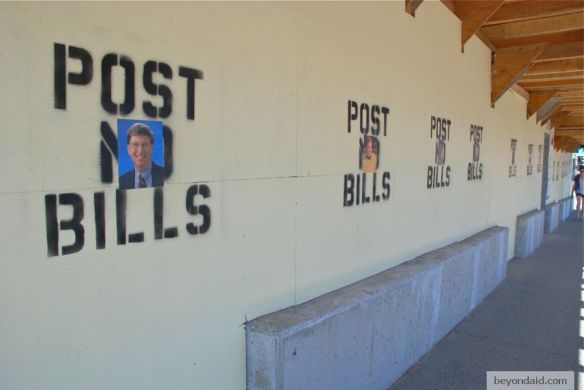 Mau Mau trial
The Standard’s Kenfrey Kiberenge writes that a lawsuit brought by elderly Kenyans against the British government highlights “the West’s double standards” in matters of human rights:

“Britain is a strong backer of an ICC case in which four Kenyans face charges of crimes against humanity related to the 2008 poll violence which left more than 1,000 people dead. Questions to any British official about these cases attract a uniform answer: let justice run its course.
Why then is the same administration seeking to have the Mau Mau case struck out on a technicality?”

Bad advice
The World Food Programme is predicting that 1.6 million Malawians will need food assistance over the next few months, in part because of the currency devaluation demanded by the IMF:

“The recent devaluation of the national currency by 49 percent, coupled with soaring inflation at 17.3 percent, has produced sharp increases in the prices of basic goods and services, pushing the cost of living to unsustainable levels for many Malawians. Food prices have been particularly affected by high transport costs due to increases in the price of fuel. Retail maize prices have already increased by 50 percent compared to the same time last year, and are expected to increase in the lean season.”

“At a news conference earlier in the day before the vote, Dlamini-Zuma sought to dispel fears that South Africa might seek to use the AU post to try to dominate the continent.
Some smaller countries had argued that her candidacy broke an unwritten rule that Africa’s dominant states should not contest the AU leadership.
‘South Africa is not going to come to Addis Ababa to run the AU. It is Dlamini-Zuma who is going to come to make a contribution,’ she told reporters.”

Classified euphemism
The Council on Foreign Relations’ Micah Zenko quotes Newsweek’s Daniel Klaidman to illustrate the extent of the Obama administration’s drone-policy opacity, particularly when it comes to the CIA’s practice of killing “individuals who are deemed guilty not based on evidence, but rather on their demography”:

“Signature strike has gotten to be sort of a pejorative term. They sometimes call it crowd killing. And it makes a lot of people uncomfortable. If you don’t have positive ID on the people you’re targeting with these drone strikes. So the CIA actually changed the name of signature strikes to something called TADS. I had the acronym but I didn’t know what it stood for. I had a couple of words. I kind of figured it out. Terrorist, T for terrorist, S for strike and I was trying to find out what does the A-D stand for. Eventually I figured it out. It was Terrorist attack disruption strike. And I was going to put it in Newsweek. And actually it was the excerpt from my book. And various agencies from the government were very unhappy about that. I sort of could not understand why. They said, well, it’s a classified term. And I said, well, why would it be classified? It doesn’t make any sense. It’s just a term to describe a particular kind of activity that we know takes place. They asked me not to print it. You know, I printed it anyway.”

Top of the charts
The Financial Times reports on a new survey that found the UK oil and gas sector has faced more bribery prosecutions than any other industry in the last four years:

“The study by Ernst & Young found that of 26 completed cases since 2008, oil and gas made up nearly one-fifth of prosecutions. The industry saw five completed cases, compared to three each in the medical goods, insurance, and engineering and construction sectors.
Most of them involved payments made abroad, or kickbacks to foreign government officials.”

Controversial philanthropy
The Independent suggests that the Bill and Melinda Gates Foundation’s decision to devote millions to the development of genetically modified crops “could be the most significant PR endorsement for the controversial technology”:

“The Microsoft founder and his wife have established themselves as major players in global health and development over the past 16 years, having donated £26bn. Only last week Melinda Gates was in London to pledge $560m (£360m) to improve family-planning services across the developing world. But the Foundation’s support for GM crops has attracted criticism, as has its investment in Monsanto – one the world’s largest GM seed producers.”

Bank Recidivism
Reuters reports that HSBC’s claims to have left its money-laundering days behind may be premature:

“Former employees in [HSBC’s New Castle, Delaware, anti-money laundering office] describe a febrile boiler-room environment overseen by managers uninterested in investigating transactions with possible links to drug trafficking, terrorist financing, Iran and other countries under U.S. sanctions, and other illegal activities. Instead, they say, the single-minded focus was on clearing out the paperwork as fast as possible. ”

Too much help
Inter Press Service reports that not everyone thinks the billions in aid pledged to Afghanistan last month will be entirely helpful::

“The plan ‘Toward Self-Reliance’ promoted by the international community and endorsed by the Afghan government is grounded in a similar oxymoron: the call for the Afghan state to get back its sovereignty and ownership is made by those who are preventing it from happening.
The presence of foreign armies and of the international community ‘is one of the major elements that prevents the State, the political system, the ruling elite, from gaining full legitimacy,’ [the London School of Economics’] Antonio Giustozzi tells IPS. ‘Not necessarily because the foreigners pre-empt that, but because any government that relies on external support to stay in power does not have legitimacy.’ ”