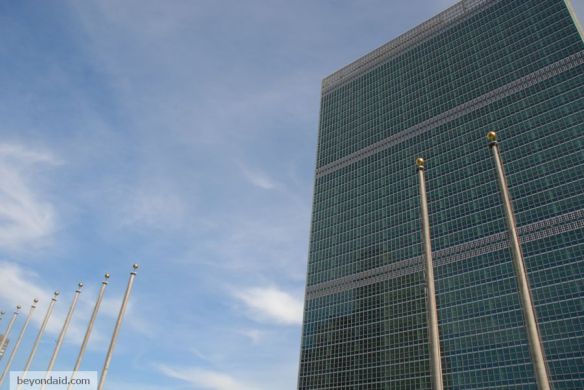 Gulf build-up
The Wall Street Journal reports the US is building a missile-defense station in Qatar, but its location is a secret because of “the sensitivity surrounding any U.S. military deployments in the emirate”:

“The Pentagon chose to place the new radar site in Qatar because it is home to the largest U.S. military air base in the region, Al Udeid Air Base, analysts say. More than 8,000 troops are stationed there and at another U.S. base in Qatar.
…
Officials said the U.S. military’s Central Command, which is overseeing the buildup to counter Iran, also wants to deploy the Army’s first Terminal High Altitude Area Defense missile-interceptor system, known as a THAAD, to the region in the coming months, possibly in the United Arab Emirates.”

Torture admission
The Independent reports that the British government has admitted for the first time that colonial forces tortured and sexually abused Kenyans during the Mau Mau rebellion more than 50 years ago:

“The starling admission came as a trio of elderly Kenyans stood up in court to describe how they were beaten, castrated and sexually assaulted by British forces and their Kenyan allies during the pro-independence rebellion.
The three Kenyans are suing the Government in a landmark legal case that could lead to a deluge of compensation claims from victims of British colonial violence around the world.”

“A health expert, speaking to AFP on condition of anonymity because he was not authorised to speak to the media, said the attack was the latest in an alarming trend of violence against polio workers.
He said there had been threats and announcements in mosques branding the vaccine anti-Islam and blamed ‘a new wave of attacks on polio workers’ on the CIA’s use of Pakistani doctor Shakeel Afridi to help find bin Laden.
The doctor was jailed for 33 years in May after helping the CIA find Osama bin Laden using a hepatitis vaccination programme as cover.
‘It has become a very serious and critical issue. People suspect foreigners involvement in the programme and fake campaign by Afridi has given further credence to conspiracy theory,’ he said.
He said polio workers were beaten in the capital Islamabad on Monday, a team fired on in the southern town of Jacobabad and a motorcycle stolen in the southwestern town of Ziarat.”

ATT escape clause
Amnesty International is calling upon US President Barack Obama not to water down the Arms Trade Treaty currently being negotiated at UN headquarters in New York:

“President Obama’s officials have indicated they want the treaty to include an escape clause that would allow national security considerations to override any serious human rights concerns when deciding to supply arms.
…
Amnesty International is urging governments to ensure a ‘Golden Rule’ on human rights is included in the treaty. This would mean that if there is a substantial risk arms due to be supplied by a country are likely to be used to commit serious human violations the arms transfer shall not take place.
Many governments and most US allies support this position. However, some influential states including China, Russia and US have been promoting weaker rules.”

De-development
The New School for Social Research’s Tarak Barkawi uses the example of private security companies to take on “the big lie of private sector efficiency”:

“One of the hidden costs of privatisation is that knowledge and expertise are no longer retained by public institutions. Instead, they become the property of private contractors. Militaries, police forces, and other public services lose the ability and the institutional memory to conduct various tasks. Governments must then pay the price over and over again for contractors to do the job badly.
Contractors care little about developing and retaining dedicated expertise in particular tasks. They need only enough to secure the contract. Their bottom line is profit, not security or the public good. As a consequence, privatisation is a kind of “de-development”, a de-modernisation of the services government provides and which we pay for through taxes.”

Punishing banks
Global Witness’s Stefanie Ostfeld argues that the only way banks will get serious about tackling money laundering is if they and their executives face harsh financial and criminal penalties:

“Global Witness investigations have detailed how major banks including Barclays, Citibank and HSBC, have done business with corrupt senior officials from Nigeria, Angola, Turkmenistan, Liberia, Equatorial Guinea and Republic of Congo. Banks are the first line of defense against corrupt funds, but as long as they continue to accept the proceeds of state looting and grand corruption, as long as they continue to facilitate the money laundering that makes drug trafficking, organized crime and terrorist finance possible, they are fully complicit in these crimes and the poverty that persists in so many countries.”

NGOs as instrumentalities
FCPA Blog’s Philip Fitzgerald argues that NGO staff should, in some cases, be considered “foreign public officials” under anti-bribery legislation, such as the US Foreign Corrupt Practices Act:

“Certain NGOs, then, can be considered to be exercising part of the powers usually reserved to a state authority. Nuanced analysis is, however, necessary. The keys, as with instrumentalities under the FCPA, would be the degree of state influence and the degree to which the NGO officials are performing a public function.
…
If NGOs can be public international organizations for purposes of the OECD convention and global anti-corruption regimes, the fight against graft would benefit from a very interesting extension to the reach of the current international anti-bribery framework.”

Drone casualty report
Inter Press Service reports that a new study that found no civilian deaths caused by US drone strikes in Pakistan this year has come under fire for its underlying methodology:

“ ‘[New America Foundation] relies only on a small number of media reports immediately following a strike. Sometimes we learn crucial facts days, weeks or even months after an initial attack,’ [the Bureau for Investigative Journalism’s Chris Woods] told IPS.
‘In February of this year, for example, a major investigation by Associated Press, based on 80 eyewitness testimonies from civilians in Waziristan, found previously unknown evidence of civilian deaths in 20 percent of the sampled strikes. Unfortunately, NAF has not incorporated these important findings into its data,’ said Woods.”