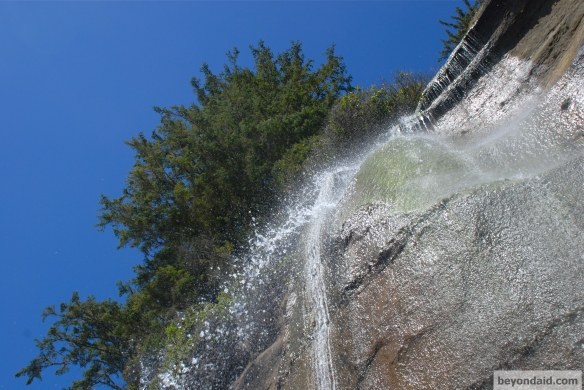 Dangerous business
The UN News Centre reports that World Health Organization head Margaret Chan has singled out “big business” as a top threat to the fight against non-communicable diseases:

“ ‘It is not just Big Tobacco anymore. Public health must also contend with Big Food, Big Soda, and Big Alcohol. All of these industries fear regulation, and protect themselves by using the same tactics.’
She said these tactics include front groups, lobbies, promises of self-regulation, lawsuits, and industry-funded research that ‘confuses the evidence and keeps the public in doubt.’
They also include gifts, grants, and contributions to worthy causes that cast these industries as respectable corporate citizens in the eyes of politicians and the public, she added. They include arguments that place the responsibility for harm to health on individuals, and portray Government actions as interference in personal liberties and free choice.
…
‘Let me remind you. Not one single country has managed to turn around its obesity epidemic in all age groups. This is not a failure of individual will-power. This is a failure of political will to take on big business.’ ”

IP enforcement
The Guardian reports that a new draft agreement gives the world’s poorest countries an eight-year “grace period” instead of the exemption from international intellectual property laws that they had sought:

“ ‘They should have gotten more,’ says Sangeeta Shashikant, of the Third World Network, an NGO with offices in Geneva. ‘Eight years is nothing, really. The conditions in [least developed countries] aren’t really going to change in eight years.’
A handful of rich countries – led by the US and the EU – were reportedly adamant in their opposition to the LDCs’ proposal, which would have allowed the countries to maintain their exemption from the intellectual property rules for as long as they remained officially classified as LDCs.
…
If LDCs were to lose their exemption, any of the countries that failed to comply with the Trips agreement would be open to lawsuits under the WTO’s dispute settlement system. While it would be unlikely for a developed country to challenge an LDC in that forum, rich nations could use LDCs’ non-compliance to pressure them in other ways, such as by withholding aid money.”

Lethal aid
Reuters reports that the US could decide as early as this week to help arm Syria’s rebels:

“U.S. officials are adamant that Washington will not put ‘boots on the ground,’ which means deploying troops.
Fredrick Hof, a former senior U.S. official who worked on Syria policy, said the administration might decide to take charge of the distribution of weapons to the rebels, but not necessarily to provide U.S. arms.”

Boundless Informant
The Guardian reports that the National Security Agency’s newly revealed surveillance program extends well beyond monitoring communications within the US:

“A snapshot of the Boundless Informant data, contained in a top secret NSA ‘global heat map’ seen by the Guardian, shows that in March 2013 the agency collected 97bn pieces of intelligence from computer networks worldwide.
Iran was the country where the largest amount of intelligence was gathered, with more than 14bn reports in that period, followed by 13.5bn from Pakistan. Jordan, one of America’s closest Arab allies, came third with 12.7bn, Egypt fourth with 7.6bn and India fifth with 6.3bn.”

Thinking ahead
The Blue Planet Project’s Meera Karunananthan writes that events in El Salavador, where a ban on metal mining is being considered, show how difficult it can be for a “developing” country to protect its fresh water:

“Meanwhile, both [US-based] Commerce Group and [Canadian-based] Pacific Rim are using a World Bank trade tribunal to circumvent community consent and state regulation. They are suing the Salvadoran government for more than $400m through the International Centre for the Settlement of Investment Dispute (ICSID), whose mandate is to protect investment rights.
…
As scientists and world leaders deliberate on how to fix the global water crisis, there should be greater international support for communities and countries attempting to forge new paths away from water-destructive economies. If El Salvador overcomes the odds and becomes the first country in the world to ban metal mining, it could serve as a model for a world grappling with the threat of an imminent water crisis.”

State secrets
CBS News reports on documents suggesting the US State Department covered up allegations of serious wrongdoing by its staff:

“In such cases, [Diplomatic Security Service] agents told the Inspector General’s investigators that senior State Department officials told them to back off, a charge that [former Inspector General investigator Aurelia] Fedenisn says is ‘very’ upsetting.
‘We were very upset. We expect to see influence, but the degree to which that influence existed and how high up it went, was very disturbing,’ she said.
In one specific and striking cover-up, State Department agents told the Inspector General they were told to stop investigating the case of a U.S. Ambassador who held a sensitive diplomatic post and was suspected of patronizing prostitutes in a public park.”

BG Group v. Argentina
Bloomberg reports that the US Supreme Court has agreed to hear a case in which a British oil and gas company is trying to obtain a $185 million award from Argentina’s government for capping natural gas prices in 2002:

“BG says the price freeze caused the bankruptcy of Metrogas SA, an Argentine gas distributor it previously controlled. BG says that, had it filed suit, it would have been punished under Argentine law and excluded from negotiations designed to mitigate the effects of the price cap.
The Obama administration urged the high court to reject the BG appeal, saying the appeals court reached the right decision.”

Let them eat cake
Oxfam’s Mohga Kamal-Yanni writes that the IMF, which may soon agree to lend millions to Egypt, does not seem to share Egyptians’ primary concerns, which she lists as “bread, freedom, social justice”:

“Instead, [the IMF] narrowly focuses on three economic measures: removing fuel subsidies, increasing the General Sales Tax (GST), and floating the pound, despite the clear signs of unrest among ordinary Egyptians as they have already started to suffer the impact of the fuel crisis.
…
And other ways to improve the fiscal and economic situation are not being taken seriously by either the government or the IMF. Civil society and academics have proposed measures such as progressive taxation, taxing the stock exchange, or removing fuel subsidies for rich people and energy-intensive industry. The IMF’s typical answer is that these measures would take time and not raise sufficient revenue.”