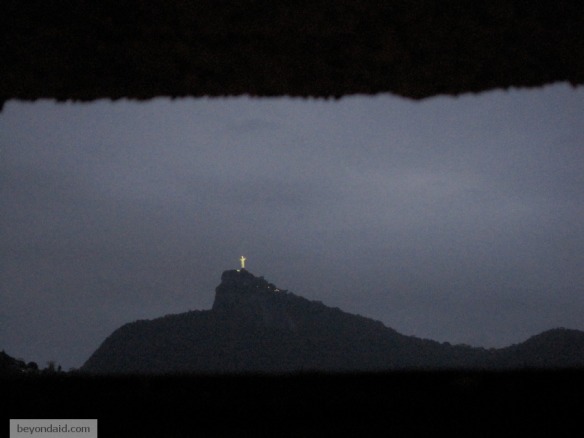 Rio+20 leak
The Guardian reports a leaked agenda for June’s Rio+20 conference suggests countries will be called upon to agree to 10 new sustainable development goals but overall, the meeting promises to be much less ambitious than the original earth summit.
“Unlike the 1992 earth summit when over 190 heads of state set in motion several legally binding environment agreements, leaders this time will not be asked to sign any document that would legally commit their countries to meeting any particular targets or timetables. Instead, they will be asked to set their own targets and work voluntarily towards establishing a global green economy which the UN believes will reduce poverty and slow consumption.”

Transforming governance
The Inter Press Service reports on growing calls for radical changes in global governance in order to address issues such as poverty and environmental destruction.
“ ‘We need to have a “constitutional moment” in world politics, akin to the major transformative shift in governance after 1945 that led to the establishment of the United Nations and numerous other international organisations,’ said Frank Biermann of VU University Amsterdam and director of the Earth System Governance Project.
…
Transforming international governance will be challenging since nation-states are almost entirely concerned with their own short-term interests, [Biermann] acknowledges. However, countries give up some of their power when they join the World Trade Organisation.
‘We ought to be able to do this for the protection of the planet and act as a community of nations,’ he said.”

Guardians of the future
The University of East Anglia’s Rupert Read argues that true democracy must take into account the interests of future generations, and to that end, he proposes the integration of  “guardians” into Britain’s existing parliamentary system.
“The members of this body would be selected by sortition, as is current practice for jury service, in order to ensure independence from present-day party political interests.
The Guardians would have a power of veto over legislation that were likely to have substantial negative effects for society in the future, the right to review major administrative decisions which substantially affected future people and the power to initiate legislation to preserve the basic needs and interests of future people.”

Immigration assistance
The Center for Global Development’s Michael Clemens argues the US, by tweaking its immigration policies, could provide significant assistance to earthquake-ravaged Haiti without spending any money or increasing the number of immigrants coming to its shores.
“First, the administration could reverse the current ban on Haitian participation in the U.S.’s largest employment-based visa program, the H-2 temporary low-skill work visa. All Haitians are currently ineligible to receive these visas. If even a few thousand Haitians at a time participated in that program over the next decade, it would generate more money for Haitian families than the entire U.S. infrastructure reconstruction allocation for Haiti. Fiscal cost: zero. It would even generate net positive U.S. tax revenue. Effect on Americans’ jobs: none. Removing the ban on Haiti would simply allow employers already seeking laborers to draw from Haiti instead of being limited to the 53 currently-eligible countries like Guatemala and Mexico.”

Acting together
Norwegian development and environment minister Erik Solheim argues “poverty is about politics” and its solutions lie beyond aid.
“As Norway’s minister for both the environment and development since 2007, I meet with other countries’ ministers with both portfolios, and it has come as a shock to see how the two groups lead such separate lives. Each has its own important agenda, its own analysis of the challenges ahead, its own strategic plans, and literally its own language. While each recognizes the importance of the other’s agenda, unless they talk and act together, neither group’s goals will be achieved.
…
We must be careful not to fool ourselves into believing that the MDGs can be achieved through development aid alone. The wider politics of poverty must be placed at the top of the international agenda, along with the three factors most critical to development: climate, conflict, and capital.”

Western corruption
Inuka Kenya Trust’s John Githongo argues rich countries have fallen behind their “developing” counterparts in terms of awareness of and mobilization against high-level corruption.
“We live in an increasingly multipolar world where graft is concerned. It’s the turn of the developing world to watch how the west handles fraud and corruption at the highest levels in their corporate and other sectors. I would like to argue that the organic youth-heavy movements in the west, such as Occupy Wall Street, are part of this shift, except the “c” word isn’t being used – yet. This is a pointer to what I predict the fight against corruption will look like in 2012.”

Social cohesion
Oxfam’s Duncan Green issues a “fuzzword alert” over social cohesion and critiques the treatment given to the term in a new Organisation for Economic Co-operation and Development report.
“Whenever a new idea becomes popular like this, the danger is that instead of looking afresh at what it contributes to our understanding of development, we just recycle our existing set of ideas and say ‘because of complexity/ social cohesion/ climate change, you should do exactly what we’ve being saying all along’. I think the OECD is in danger of going down that road in this report – building social capital, supporting social mobility, and promoting social inclusion are fine, but they were standard demands long before anyone started talking about cohesion. The more interesting question is what we should be doing that’s additional or different because of a social cohesion ‘lens’, and I didn’t find that here.”

Southeast Asian exceptionalism
Alpha International Consulting’s Seth Kaplan uses the example of Southeast Asia to question orthodox thinking on the prerequisites for economic development.
“Indonesia, for instance, reduced poverty from 60 percent in 1970 to 22 percent in 1984. Vietnam reduced it from 58 percent in 1993 to 14 percent in 2008.
Yet, the region does not meet the standard model for economic success, at least as defined by the World Bank and the rest of the Western development community. Governments have historically not been held in check by elections. Corruption is widespread. Governance has rated low on most indicators.”