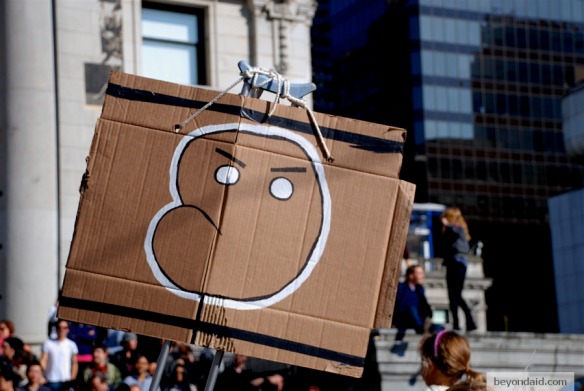 New nuclear age
The Guardian reports on a new study suggesting countries that already possess nuclear arms are planning to spend large sums of money to upgrade their capabilities over the coming years.
“Despite government budget pressures and international rhetoric about disarmament, evidence points to a new and dangerous ‘era of nuclear weapons’, the report for the British American Security Information Council (Basic) warns. It says the US will spend $700bn (£434bn) on the nuclear weapons industry over the next decade, while Russia will spend at least $70bn on delivery systems alone. Other countries including China, India, Israel, France and Pakistan are expected to devote formidable sums on tactical and strategic missile systems.
For several countries, including Russia, Pakistan, Israel and France, nuclear weapons are being assigned roles that go well beyond deterrence, says the report. In Russia and Pakistan, it warns, nuclear weapons are assigned ‘war-fighting roles in military planning’.”

Dictator savings
Global Witness has welcomed a resolution adopted at last week’s UN anti-corruption conference that calls for national governments to enforce laws that forbid banks to accept money looted from the coffers of other states.
“Corruption on the scale that causes revolutions cannot happen without a bank to take the money. The very fact that some states are trying to get stolen money returned makes it clear that something has gone very wrong; these funds, which belong to the people of Egypt and Tunisia, should not be in foreign bank accounts in the first place,” said Global Witness’s George Boden.

Seal of approval
A new report by the Centre for Research on Multinational Corporations detailing labour rights violations on tea plantations owned by British-Dutch company Unilever raises “doubts regarding the reliability of Rainforest Alliance certification.”
“Civil society organisations have been urging tea companies for many years to address the precarious working conditions of millions of tea workers worldwide. In response, there is a clear trend of multinational tea packers indeed stepping up their efforts to address sustainability issues in this sector. To this end tea companies are increasingly making use of independent and more rigorous multi-stakeholder sustainability standard systems, such as Rainforest Alliance (RA), Utz Certified and Fairtrade, which are generally seen as best industry practice. As a consequence the share of world tea exports certified by global standard systems grew by 2000% in the period from 2004 to 2009 alone. It is estimated that roughly 15% of tea exported worldwide will have been certified in 2011. Now several years later this study is assessing whether there is evidence of improvement of the working conditions on tea estates that have achieved RA certification, the most important sustainability certification in the tea sector in terms of volume.”

Biopiracy
Al Jazeera reports on allegations that a subsidiary of US biotech giant Monsanto genetically modified Indian eggplant seeds without obtaining prior authorization.
“In response, the national biodiversity authority has announced its plans to prosecute Monsanto for carrying out this research without seeking its permission and the consent of hundreds of thousands of farmers who have cultivated these varieties for generations. Officials at the authority say that, by failing to consult with farmers and the national biodiversity authority, the multinational firm has run foul of India’s Biological Diversity Act 2002. The law states that, if companies want to genetically modify indigenous varieties of seeds and plants – for research or commercialisation purposes – they must obtain prior consent of the authority. That never happened, the national biodiversity authority says, so now Monsanto and Mahyco look set to face charges of biopiracy – a fancy word for theft. It will be the first criminal prosecution under the act if it goes ahead. Though brinjal is a vegetable that is now widely eaten and grown around the world, it is native to south Asia with more than 2,500 varieties.”

Colonization through investment
The Observer reports on the fallout of a biofuel bust in Tanzania, where a village leader speaks of “colonialism in the form of investment.”
“A quarter of the village’s land in Kisarawe district was acquired by a British biofuels company in 2008, with the promise of financial compensation, 700 jobs, water wells, improved schools, health clinics and roads. But the company has gone bust, leaving villagers not just jobless but landless as well. The same story is playing out across Africa, as foreign investors buy up land but leave some of the poorest people on Earth worse off when their plans fail.”

The right to food
A UN food expert is urging world leaders to put the right to food ahead of commercial interests at this week’s G-20 summit.
“The G-20 made an important statement of intent by placing food security at the top of its agenda. But agreeing on a food security action plan without addressing biofuels and speculation would be like running a bath without putting in the plug. All of the good ideas simply drain away,” according to UN Special Rapporteur on the right to food Olivier De Schutter.

Development 3.0
The World Bank’s Justin Yifu Lin argues for a third way in development thinking – in the wake of “structuralist, state-led” policies on the one hand, and “largely neo-liberal” ones on the other – and addresses critiques from three eminent economists.
“The credibility argument [that policies were not reversible] was used to support the shock therapy in the East European and Formal Soviet Union’s transition in the early 1990s. However, to ward off large unemployment and subsequent social/political instability, governments in transition economies were very often forced to provide other disguised and less efficient forms of subsidies and protection to firms in the old priority sectors even though those firms were privatized. As a result most transition economies encountered the awkward situation of ‘shock without therapy’.”

Business and human rights
In an interview with Business Ethics Magazine, John Ruggie talks about the voluntary guiding principles he formulated over his six years as UN special representative for business and human rights and the inevitable evolution towards legal accountability.
“Finally, judicial remedy will continue to evolve. Judicial reform in countries where the rule of law is weak and governments are corrupt is a slow process, but it is happening. And the web of legal liability for corporate involvement in egregious violations is expanding in the home countries of multinational corporations—a trajectory that will continue no matter how the U.S. Supreme Court rules on the applicability of the Alien Tort Statute to legal persons, such as corporations.”