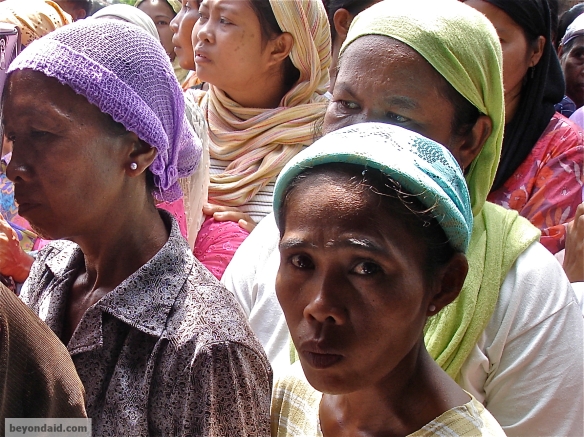 Secret meetings
The Washington Post reports that the White House has held a series of meetings to “consider for the first time whether to prepare for unilateral strikes” in North Africa as a result of a perceived increase in the threat of terrorism:

“ ‘Right now, we’re not in position to do much about it,’ said a senior U.S. counterterrorism official involved in the talks. As a result, he said, officials have begun to consider contingencies, including the question of ‘do we or don’t we’ deploy drones.
…
In addition, the U.S. military has launched a series of clandestine intelligence missions, including the use of civilian aircraft to conduct surveillance flights and monitor communications over the Sahara Desert and the arid region to the south, known as the Sahel.”

“But in oral arguments in one of the court’s biggest human rights cases in years, some justices suggested they might not close U.S. courts to similar claims against individuals, including those who take refuge in the United States, or to claims involving U.S. companies.
…
More than 150 lawsuits accusing U.S. and foreign corporations of wrongdoing in more than 60 foreign countries have been filed in U.S. courts in the last two decades, according to the U.S. Chamber of Commerce.”

Running interference
The Globe and Mail reports that a Canadian cabinet minister is being accused of “threatening the integrity and independence of the penal and parole systems” in the wake of comments made following the repatriation of Omar Khadr who spent a decade in detention at Guantanamo Bay after his capture at the age of 15:

“[Public Safety Minister Vic] Toews’ remarks are controversial because while he was the government minister tasked with overseeing Mr. Khadr’s repatriation, he is also the minister who presides over the Correctional Service of Canada.
Mr. Toews also appoints and renews the adjudicators for the National Parole Board – the same patronage appointees who are charged with determining any given individual prisoner’s liberties.
Now these same officials who must now try to figure out whether to allow Mr. Khadr out of prison and onto parole in coming months, or whether to lock him up until his sentence expires in 2018.
Lawyers for Mr. Khadr wonder whether Mr. Toews’ remarks too clearly telegraph to his officials what he would like to have happen.”

Death tolls
The Associated Press reports that US military deaths in Afghanistan have reached 2,000, a number that is dwarfed by the number of dead Afghan civilians:

“Tracking deaths of Afghan civilians is much more difficult. According to the UN, 13,431 civilians were killed in the Afghan conflict between 2007, when the UN began keeping statistics, and the end of August. Going back to the U.S.-led invasion in 2001, most estimates put the number of Afghan civilian deaths in the war at more than 20,000.”

“ ‘The concept of proportionality has been thrown out of the window. Indeed, some are more equal than others. Inequality is evident – no visas are required for entry in most of our countries – while we need a Schengen Visa or UK Permit to step foot on European soil.’
Patterson said the Caribbean Community (CARICOM) will need to address without further delay ‘such issues as investment, competition policy and government procurement to avert the danger of undertaking obligations or conferring rights on others that do not yet exist within the Community but already fall within the framework of the EPA’.”

Big deal
The New York Times reports that the board of Anglo-Swiss miner Xstrata has approved a takeover bid that would “create a behemoth in the world of mining and minerals”:

“First announced in February, the proposed transaction would unite Glencore, a giant commodities trading house, with Xstrata, its longtime mining partner. Together, the two would create an international mining company with both significant physical assets and an enormous trading operation that has invaluable insights into global demand for minerals.
The talks have drawn in many of London’s top deal makers, generating big fees for the bankers involved if the transaction is approved.”

Gray wave
The Guardian reports that legally enforceable rights specific to people over the age of 60, who will outnumber those under 15 by 2050, remain a rarity in today’s world:

“[The International Association of Gerontology and Geriatrics’ Laura] Machado said there is a split between rich and poor countries on the need for a legally binding international instrument on ageing along the lines of the UN convention on discrimination against women.
‘It is clear there are two groups with very different positions,’ she said. ‘The EU especially does not consider such a convention on older persons necessary, whereas the Latin American bloc wants a legally binding instrument that will pave the way for laws at the state level.’ ”

Jobs, jobs, jobs
Inter Press Service reports that the latest edition of the World Bank’s annual World Development Report marks something of a shift from the institution’s traditional fixation on economic growth:

“ ‘The conventional wisdom is to focus on growth as a precondition for continued increases in living standards and strengthened social cohesion. But … the impact of growth on poverty reduction varies considerably across countries,’ the report notes.
‘If growth indicators captured the intangible social benefits from jobs, from lower poverty to greater social cohesion, a growth strategy and a jobs strategy would be equivalent. But a growth strategy may not pay enough attention to female employment, or to employment in secondary cities, or to idleness among youth. When potentially important spillovers from jobs are not realized, a jobs strategy may provide more useful insights.’ ”