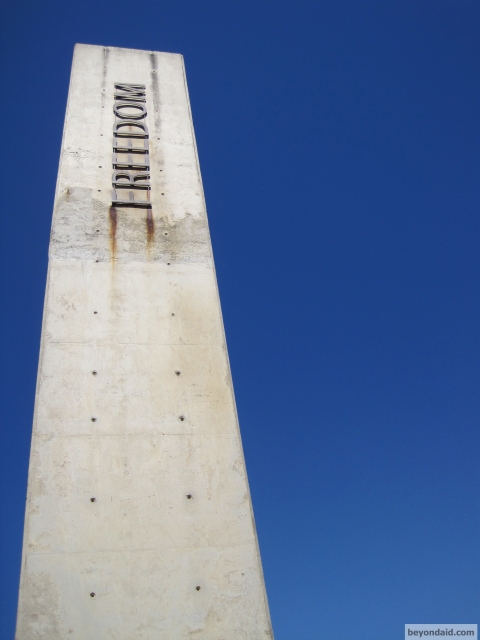 Immigration disaster
The Associated Press reports that another boat carrying African migrants, this time an estimated 200, has capsized on its way to Europe:

“The capsizing occurred some 65 miles (105 kilometers) southeast of Lampedusa but in waters where Malta has search and rescue responsibilities.
…
Last week, a ship carrying some 500 people capsized off Lampedusa, killing more than 300 people. Only 155 survived. The deaths prompted calls for the European Union to do more to better patrol the southern Mediterranean and prevent such tragedies.”

And the winner is…
RT reports that the global watchdog tasked with overseeing the destruction of Syria’s chemical weapons has won this year’s Nobel peace prize:

“The Organization for the Prohibition of Chemical Weapons (OPCW) was founded in 1997 to enforce the Chemical Weapons Convention, an international treaty that bans the production, storage and use of chemical weapons.
Its main job since then has been the ongoing monitoring of the process of chemical disarmament by the treaty’s signatories, particularly the US and Russia, the countries that held the largest stockpiles at the time it was signed.
…
Awarding the prominent prize to the OCPW came as a surprise to many. Nobel Prize watchers didn’t mention the organization as a likely laureate. Predictions favored several individuals, including Malala Yousafzai, a teenage Pakistani women’s rights campaigner who survived a Taliban attack, Dr. Denis Mukwege, a gynecologist and rape victims’ defender from Congo, Claudia Paz y Paz, the resilient mafia-fighting Guatemalan attorney general, and Sister Mary Tarcisia Lokot, a nun at the forefront of post-war reconciliation in Uganda.”

Above the law
In a New York Times op-ed, Nobel laureate Desmond Tutu argues countries (like the US) that reject membership in the International Criminal Court are “looking for a license to kill, maim and oppress” with impunity:

“Most of all, they believe that neither the golden rule, nor the rule of law, applies to them.
…
Perpetrators of violence must not be allowed to wriggle free.
Moreover, where justice and order are not restored, there can be no healing, leaving violence and hatred ticking like a bomb in the corner.”

Mercury treaty
The BBC reports that countries have started signing a legally binding agreement regulating the trade and use of mercury:

“The Minamata Convention was named after the Japanese city that, in the 1950s, saw one of the world’s worst cases of mercury poisoning.
…
The [UN Environment Programme] assessment said the concentration of mercury in the top 100m of the world’s oceans had doubled over the past century, and estimated that 260 tonnes of the toxic metal had made their way from soil into rivers and lakes.”

“The bank’s safeguard policies partially address protecting indigenous peoples’ rights and ensuring that people are resettled appropriately, but fall short of international human rights law on those areas and more generally. Moreover, the policies don’t even require the World Bank to analyze human rights risks in designing and carrying out its activities.
…
The World Bank is undertaking its first wholesale review of its safeguard policies. If it goes right, bank staff will be required to identify potential human rights risks and work to prevent or mitigate them, to avoid contributing to abuses.”

For-profit spying
The Guardian reports on the Canadian government’s “increasingly aggressive promotion of resource corporations at home and abroad,” which appears to extend to espionage and intelligence sharing with companies:

“ ‘There is very substantial evidence that the spying Canada was doing for economic reasons aimed at Brazil is far from an aberration,’ Guardian columnist Glenn Greenwald told Canadian media on Tuesday. Greenwald hinted that he will be publishing further documents on [Communications Security Establishment Canada].
‘We’ve already seen how Canadian embassies around the world essentially act as agents for Canadian companies – even when they’re implicated in serious human rights abuses,’ said Jamie Kneen of MiningWatch Canada, an NGO watchdog. ‘We just had no idea how far they were willing to go.’ ”

More equal than others
In the wake of the recent US military raids in Somalia and Libya, Foreign Policy’s David Rothkopf writes that America must reject “exceptionalism” in order to be a great nation:

“Exceptionalism is contrary to the spirit of the U.S. Constitution and the ideas that led to the founding of the country. If there is one lesson of human civilization, it is that equality under the law needs to apply to nations as well as people or else chaos and injustice ensue. This past weekend’s raids were more damaging not because the outcome of one was unsuccessful but because the outcome of the other was. If countries feel they can swoop in and snatch up bad guys anywhere, whenever, and however it suited them, the world would quickly fall into a state of permanent war.”

“The real crisis is a political one: corporations are attempting to control water policy to guarantee secure access to scarce water resources. When governments relegate basic services, such as water and sanitation, to profit-driven multinationals that hike up the service fees and exploit scarce resources, we are dealing with a crisis generated by an unsustainable economic model.
Yet that model continues to be promoted around the world at events like the Budapest Water Summit, where governments discuss the future of the world’s water with polluters and water profiteers rather than with the communities most impacted by the global water crisis.” 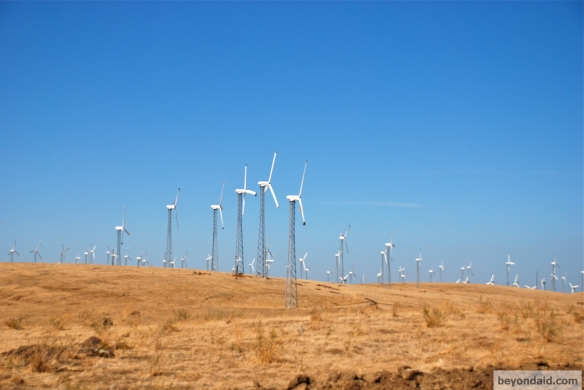 Casualties of war
In an interview with France 24, the UN refugee agency’s William Spindler discusses the uncertain humanitarian situation since the start of the French offensive in northern Mali, where the number of refugees “could rise by as much as 400,000”:

“Only organisations that already had staff on the ground are present. International NGOs have not yet been given access to the combat zones since the French army launched its offensive.
…
The situation will only worsen because of growing difficulties in transportation, especially between the cities of Mopti and Gao. We also fear an increase in the number of internally displaced people, which we currently estimate at 229,000.”

“ ‘I would like to confirm that we do not agree, ever, to military intervention in Mali because this would inflame the conflict in this region,’ Mursi said.
‘The intervention must be peaceful and developmental and funds must be spent on development,’ he said. ‘What we don’t ever want is to … separate the Arab north from the core of Africa.’ ”

The Pakistan exception
The Washington Post reports that a nearly completed US government counterterrorism “playbook” establishing rules for targeted killings will not immediately apply to CIA drone strikes in Pakistan:

“The adoption of a formal guide to targeted killing marks a significant — and to some uncomfortable — milestone: the institutionalization of a practice that would have seemed anathema to many before the Sept. 11, 2001, terrorist attacks.
Among the subjects covered in the playbook are the process for adding names to kill lists, the legal principles that govern when U.S. citizens can be targeted overseas and the sequence of approvals required when the CIA or U.S. military conducts drone strikes outside war zones.
…
The decision to allow the CIA strikes to continue was driven in part by concern that the window for weakening al-Qaeda and the Taliban in Pakistan is beginning to close, with plans to pull most U.S. troops out of neighboring Afghanistan over the next two years. CIA drones are flown out of bases in Afghanistan.”

Lessons from Bangladesh
The Wall Street Journal reports that Wal-Mart has announced a new “zero tolerance policy” that would mean terminating contracts with suppliers that use subcontractors without the American retail giant’s permission:

“The changes, which begin taking effect March 1, come after Wal-Mart clothing was found at a Bangladesh factory where a fire killed 112 people in November—a factory the company said was no longer supposed to be making its clothes.
The tougher new policies replace the Bentonville, Ark., retailer’s prior ‘three strikes’ approach to policing suppliers, which gave the suppliers three chances to address problems before being terminated.”

New treaty
In a Q&A with Inter Press Service, Uruguayan diplomat Fernando Lugris, who chaired 140-nation negotiations on the newly agreed and legally binding Minamata Convention on Mercury, discusses some of the issues that divided rich and poor countries:

“The GRULAC (Latin American and Caribbean Group) clearly sought to introduce health as an issue throughout the convention, and the agreed text basically contains many measures for health protection.
The group also insisted on the need to include a specific article on health. In principle, the industrialised countries felt that an article on health was irrelevant in an environmental agreement.
However, Latin America’s persistence and its clear interest in protecting human health succeeded in getting the final session of the plenary to agree on an article specifically about health.
…
The international community has clearly formulated this issue [of indigenous rights] through the U.N. Declaration on the Rights of Indigenous Peoples, which is a non-binding agreement, but unfortunately at the level of binding agreements there are still some countries that oppose making specific reference to native peoples. This is not the case in Latin America.”

Commodification salvation
The Guardian’s Claire Provost urges greater scrutiny of “market-based approaches to the world’s water woes,” whose growing popularity is setting off alarm bells in some circles:

“The global water justice movement – emboldened by a decade of struggles against the commodification and privatisation of water – warns that setting up markets for the benefits provided by ecosystems could pave the way for a wholesale commodification of nature while doing little to address imbalances of money, power and resources. Commentators have lashed out at payments for ecosystems services for heralding the greatest privatisation since the enclosure of common lands, and sounded the alarm over prospects for a future financialised global water market and the impact that could have on food security.
Alarmingly, this week’s report notes that social goals – from poverty reduction to gender inequality – are not measured or monitored in most projects, even when mentioned as priorities.”

Concentration problems
Oxfam is calling on world leaders, many of whom are about to meet at the World Economic Forum in Davos, to “commit to reducing inequality to at least 1990 levels”:

“Barbara Stocking, Oxfam Chief Executive, said: ‘We can no longer pretend that the creation of wealth for a few will inevitably benefit the many – too often the reverse is true.’
…
‘In a world where even basic resources such as land and water are increasingly scarce, we cannot afford to concentrate assets in the hands of a few and leave the many to struggle over what’s left.’
Members of the richest one per cent are estimated to use as much as 10,000 times more carbon than the average US citizen.”

Small answers
A Guardian editorial argues the international development industry appears to be incapable of leading the necessary conversation about changing the world, a debate that “needs blasting open”:

“While the questions in development are getting bigger, the professional and intellectual scene has never been so fragmented. It will take a formidable alchemy to forge strong solutions here. One thing is clear: wasting years on a technocratic debate about goals which are for advocacy more than anything else – and likely drawn up without reference to such fundamentals as political rights – is not a serious response to the dysfunctional summitry, procrastination and missed targets of recent years. And it will leave the global public square in the same state of disrepair. The conversation we need has barely begun.”