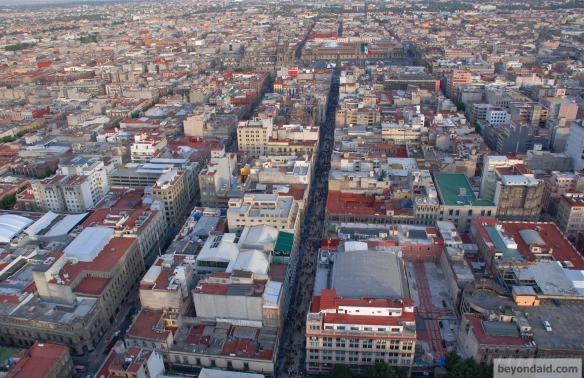 Bad timing
Oxford University’s David Priestland argues the awarding of the Nobel peace prize to the European Union at this point in time is “distinctly odd”:

“The introduction of the euro changed the EU from an institution that used economic integration to promote peace to one that is sacrificing peace on the altar of free-market economics. Brussels is being rewarded for its pacific past at the very moment it is provoking civil strife.
…
Nor did Europe’s eirenic outlook always extend beyond its borders. Individual countries have sometimes played a far from peaceful role in the world – especially the French and British meddling in their former empires. Europe’s protectionism has also damaged the interests of the developing world.”

“Once forcibly evicted and moved to the new villages, families are finding that the promised government services often do not exist, giving them less access to services than before the relocation. Dozens of farmers in Ethiopia’s Gambella region told us they are being moved from fertile areas where they survive on subsistence farming, to dry, arid areas. Ojod’s family farm was on the river, but as part of the villagization program, the government took his farm and forced his family to relocate to a dry area. There are reports that this fertile land is being leased to multinational companies for large-scale farms.
The villagization program is an Ethiopian government initiative, not one designed by the World Bank. But villagization appears to be the government’s way of implementing a certain World Bank project in five of Ethiopia’s eleven regions.”

“ ‘The dark side of our history includes the bloody repression at the Thiaroye camp in 1944 which caused the death of 35 African soldiers who fought for France,’ Hollande told the Senegalese parliament.
…
In a speech where he also paid homage to the victims of the slave trade, Hollande declared that the Françafrique policy, often criticised as neo-colonialist, is over.
‘There is France and there is Africa,’ he declared, adding that he was not going to give the Senegalese moral lectures, in an indirect reference to his predecessor Nicolas Sarkozy’s controversial speech in Dakar five years ago.”

Poisonous siege
The Independent reports on a new study linking the siege of Fallujah by Western forces during the Iraq War to the city’s “staggering rise” in birth defects:

“The latest study found that in Fallujah, more than half of all babies surveyed were born with a birth defect between 2007 and 2010. Before the siege, this figure was more like one in 10. Prior to the turn of the millennium, fewer than 2 per cent of babies were born with a defect. More than 45 per cent of all pregnancies surveyed ended in miscarriage in the two years after 2004, up from only 10 per cent before the bombing. Between 2007 and 2010, one in six of all pregnancies ended in miscarriage.”

Patent override
The Guardian reports that the Indonesian government has taken steps to allow seven “important” but patented medicines to be manufactured cheaply and locally:

“The biggest fights now are in India, where Big Pharma is battling to preserve its patents, arguing that India’s thriving generic companies will sell not just to the poor but to the whole world.
But what has happened in Indonesia is remarkable for its scale. It appears that the government of President Susilo Bambang Yudhoyono has decided to license the entire slate of medicines its population needs against HIV. It already had an order from 2007 for three older HIV drugs (efavirenz, lamivudine and nevirapine), but the new decree states specifically that this is ‘no longer sufficient’.
The drug patents belong to Merck, GSK, Bristol Myers Squibb, Abbott and Gilead.”

Tax hike
The New York Times reports that Mongolia is considering renegotiating the investment agreement it has with Anglo-Australian mining giant Rio Tinto regarding a $6 billion copper project:

“Last Monday, the caucus of Mongolia’s Democratic Party, which leads a coalition government in place since August, passed a budget proposal, which calls for a new sliding royalty on Oyu Tolgoi’s revenue that would rise to 20 percent depending on the copper price. The 2009 investment agreement set the royalty rate at 5 percent.
The new plan would also raise Oyu Tolgoi’s effective tax rate by eliminating income-tax allowances. The government would bring in 221.3 billion tugriks, or $160 million, from the royalty and 224.5 billion tugriks, or $163 million, from corporate income tax, according to estimates in the draft budget proposal.
This week, the plan is expected to reach Parliament, which will decide whether to adopt or modify the proposal.”

Paradigm shift
Intellectual Property Watch reports on a recent roundtable where one of the participants argued that global health justice will require “a body of hard and soft laws”:

“ ‘When I first entered global health, I thought global health was mostly about making rich countries devote resources to those who lack the capacity to do it,’ [Georgetown University’s Larry Gostin] said. This ‘is a northern view based upon guilt, but it is really the wrong view,’ he said.
…
There are still residual international responsibilities, but they are based on a flawed idea of international development assistance for health, which is ‘very much charitable-based, with a benefactor and a recipient.’ It is not justice-based, he said, and lacks a sense of shared responsibility, adding, ‘We need to change this paradigm.’ ”

Food futures
The Observer’s Heather Stewart decries the lack of action by rich-country governments to rein in the price of food, which she says depends more on “all-but-irrelevant events in Brussels or Berlin” than on supply and demand:

“Any tougher crackdown – forcing greater transparency about who is betting on what, with whom, for example – looks highly likely to be scuppered by the same kind of concerted lobbying that sank proposals for regulating other derivatives markets in the years before the crisis.
In the US, for example, the Commodity Futures Trading Commission is facing a legal battle over its attempts to impose ‘position limits’, constraining the share of the market single investors can hold in a number of commodities, including corn and cocoa. The proposal was struck down by a court in Washington, in a case brought by several financial sector trade bodies – though the CFTC has not given up on introducing position limits in some form.”