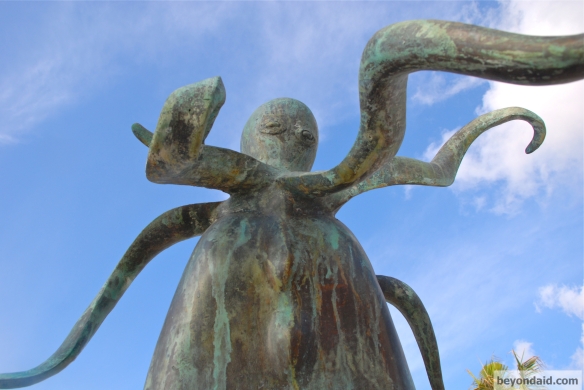 Diplomatic baby steps
The Jerusalem Post provides a transcript of new Iranian President Hassan Rouhani’s UN speech, in which he indicated a willingness “to engage immediately” in nuclear talks but also called for changes in Western attitudes and policies:

“Coercive economic and military policies and practices geared to the maintenance and preservation of old superiorities and dominations have been pursued in a conceptual mindset that negates peace, security, human dignity, and exalted human ideals. Ignoring differences between societies and globalizing Western values as universal ones represent another manifestation of this conceptual mindset.
…
The prevalent international political discourse depicts a civilized center surrounded by un-civilized peripheries. In this picture, the relation between the center of world power and the peripheries is hegemonic. The discourse assigning the North the center stage and relegating the South to the periphery has led to the establishment of a monologue at the level of international relations.”

Big signing
The Washington Post reports that the US is set to sign the international Arms Trade Treaty at the UN on Wednesday, though its entry into force still looks a long way off:

“The treaty will go into effect once it is signed and ratified by at least 50 U.N. member states. The United States will be the 89th country to sign the treaty, which was adopted in a 153 to 3 vote, with 20 abstentions, in April.
…
Only four countries have ratified the treaty — Iceland, Nigeria, Guyana and the Caribbean island state of Antigua and Barbuda. U.S. ratification requires a two-thirds vote of the Senate, where many Republicans and some Democrats are strongly opposed, and the administration is unlikely to submit it in the near future.”

Intervention fever
Le Monde reports that France is currently mulling over three options for a military intervention in the Central African Republic:

“One, the most direct, would involve increasing the number of French soldiers currently in CAR from 450 to about 1,200 for a rapid securitization operation under a UN mandate, but with considerable autonomy. The second would call for increasing the current force to about 750 troops. This reduced mobilization put forward by President François Hollande would see the French contingent provide a support role for the international mission (MISCA) already on the ground with 1,300 soldiers from Cameroon, Congo, Gabon and Chad.
The last option, seen as more of a long-term approach, would keep the number of French soldiers at 450, who would serve as a rapid reaction force capable of increasing its size if needed.” [Translated from the French.]

ICC on Westgate
International Criminal Court Prosecutor Fatou Bensouda has announced her willingness to investigate the deadly attack and siege of an upscale Nairobi mall:

“Such attacks by armed groups upon innocent civilians are contrary to international law and may constitute a crime under the Rome Statute, to which Kenya is a State Party. In expressing her solidarity with the victims, their families and the people of Kenya, and with full respect for the primacy of jurisdiction of the Republic of Kenya, the Prosecutor stands ready to work with the international community and the Government of Kenya to ensure that those responsible for these crimes are brought to justice.”

Blue-helmet crimes
Radio France Internationale reports that UN peacekeepers have been accused of misconduct, including rape, in northern Mali:

“An investigation is underway. According to information obtained by RFI on Tuesday, the rape allegations were made against Chadian soldiers belonging to the group that had left their post in Tessalit for Gao in order to protest that they had not been paid bonuses or relieved by fresh troops. According to the mission’s spokesperson, the suspects remain in custody in Gao.” [Translated from the French.]

Sharing the wealth
The Guardian reports that a town in Switzerland has voted to give a chunk of its “commodity million” to charities in countries where Swiss corporate giant Glencore operates:

“ ‘We hope that people will open their eyes to the danger that raw material extraction will be the next reputational time bomb for Switzerland,’ [Hedingen’s Samuel Schweizer] said. ‘Political leaders have not learned anything from the disaster of [Switzerland’s role at the heart of the] banking industry.’
The Berne Declaration, a non-governmental organisation campaigning against Switzerland’s role in hosting global commodity companies, said: ‘While the decision makers in the capital Berne consider our commodities industry still only a political reputation risk, the landmark decision in the rural-conservative Hedingen shows that on the ground Glencore and their competitors already have a real reputational problem in this country.
‘Remarkably and correctly, the people of Hedingen assume that tax money is not automatically white, clean or legitimate. As citizens, they take responsibility for that which the government still shies away from.’ ”

Vision with teeth
Human Rights Watch has released a new report in which it lays out a post-2015 development agenda that enforces respect for human rights:

“Setting mandatory requirements on corporations to undertake human rights due diligence around their work and publicly report on their human rights, social and environmental impacts, as well as their payments to domestic or foreign governments.
Requiring respect for human rights by international financial institutions, in all their development policies and programs.
Making the post-2015 agenda universal – with commitments applicable to all countries, not just low income ones – and strengthening accountability for delivering on these commitments to inclusive, sustainable, and rights-respecting development.”

Corporate medicine
ONE reports that its co-founder, U2 frontman Bono, has lashed out at the US oil industry for fighting against new rules requiring its overseas activities to become more transparent:

“ ‘We know corruption is killing more kids than TB, AIDS, and malaria put together. There is a vaccine and it’s called transparency,’ said Bono.
…
‘I’m no cranky anti-corporation critic here,’ Bono said. ‘I implore the people in this room, from Exxon, from Chevron… You can’t have it both ways. You can’t give alms to the poor on one level and have your hands on their throats on another.’ ”