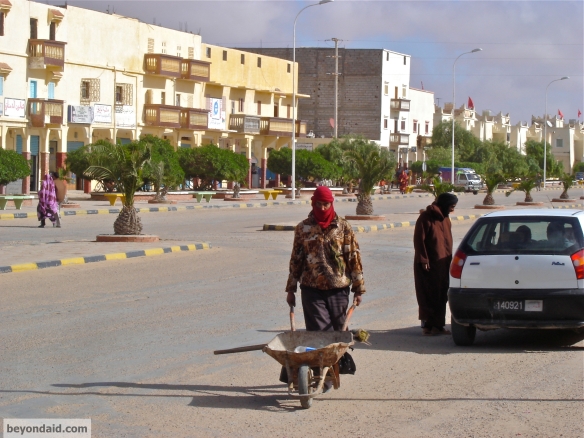 “The world reacts by asking: if you cannot count on international law, then you must find other ways to ensure your security. Thus a growing number of countries seek to acquire weapons of mass destruction. This is logical: if you have the bomb, no one will touch you. We are left with talk of the need to strengthen nonproliferation, when in reality this is being eroded.
…
I carefully studied [US President Barack Obama’s] address to the nation on Tuesday. And I would rather disagree with a case he made on American exceptionalism, stating that the United States’ policy is ‘what makes America different. It’s what makes us exceptional.’ It is extremely dangerous to encourage people to see themselves as exceptional, whatever the motivation. There are big countries and small countries, rich and poor, those with long democratic traditions and those still finding their way to democracy. Their policies differ, too. We are all different, but when we ask for the Lord’s blessings, we must not forget that God created us equal.”

“The shipments began streaming into the country over the past two weeks, along with separate deliveries by the State Department of vehicles and other gear — a flow of material that marks a major escalation of the U.S. role in Syria’s civil war.
…
The CIA shipments are to flow through a network of clandestine bases in Turkey and Jordan that were expanded over the past year as the agency sought to help Middle Eastern allies, including Saudi Arabia and Qatar, direct weapons to moderate Syrian rebel forces.”

Excessive murders
Al Jazeera reports that the Dutch government has issued a formal apology for mass executions in Indonesia during the colonial era:

“Special forces from the Netherlands carried out a series of summary executions in its former colony between 1945 and 1949, killing thousands.
In total, about 40,000 people were executed during the colonial era, according to the Indonesian government; however, Dutch figures mention only a few thousand.
…
‘They are apologising for all the war crimes, which the Dutch merely call excesses,’ [Al Jazeera’s Step Vaessen] added.
The Hague had previously apologised and paid out to the widows in individual cases but it had never said sorry or offered compensation for the victims of general summary executions.”

“ ‘If there are contracts which it is necessary to revise in the interests of Mali, we will start negotiations with the partners in question,’ [Mines Minister Boubou Cisse] said.
Cisse, a 39-year-old former World Bank economist, said the inventory would be conducted under complete transparency and its results would be made available to the public.
…
Cisse said his ministry aimed to increase the contribution of the mining sector in the national economy from around 8 percent at present to 15 to 20 percent in the long term.”

No strikes
The UN’s commission of inquiry for Syria has released its latest report on recent atrocities in the war-torn country, along with a statement making clear its position on the prospect of foreign military intervention:

“For the Commission, charged with investigating violations of international law committed by all parties to the conflict, any response must be founded upon the protection of civilians. The nature of the war raging in Syria is such that the number of violations by all sides goes hand in hand with the intensity of the conflict itself. With the spectre of international military involvement, Syria – and the region – face further conflagration, leading to increased civilian suffering.
…
There is an urgent need for a cessation of hostilities and a return to negotiations, leading to a political settlement. To elect military action in Syria will not only intensify the suffering inside the country but will also serve to keep such a settlement beyond our collective reach.”

“CADSI also took the opportunity to thank the Honourable Michelle Rempel, Minister of State for Western Economic Diversification, for her department’s recent decision to provide financial support to CADSI to strengthen the Canada brand at major international defence and security trade shows and increase the visibility of western Canadian businesses at those events.
‘Our Government is pleased to partner with CADSI to help promote western Canadian companies on the global stage,’ said Minister Rempel. ‘The defence and security industries are important economic drivers in Canada, and Western Economic Diversification Canada is committed to strengthening these key sectors.’ ”

Words and deeds
The Guardian reports that the US has thus far failed to keep its promises under the Chemical Weapons Convention that Syria is now under pressure to sign:

“About 2,611 tons of mustard gas remains stockpiled in Pueblo, Colorado. The second stockpile, in the Bluegrass region of Kentucky, is smaller – 524 tons – but more complicated to decommission, because it consists of a broader range of lethal gases and nerve agents, many of which are contained within weaponry.”

Divide and rule
Georgetown University doctoral candidate Nick Danforth argues that European colonialism’s most enduring harm has little to do with arbitrary borders:

“In Syria, the French cultivated the previously disenfranchised Alawite minority as an ally against the Sunni majority. This involved recruiting and promoting Alawite soldiers in the territory’s colonial army, thereby fostering their sense of identity as Alawites and bringing them into conflict with local residents of other ethnicities. The French pursued the same policy with Maronite Christians in Lebanon, just as the Belgians did with Tutsis in Rwanda and the British did with Muslims in India, Turks in Cyprus and innumerable other groups elsewhere.
The militarization of these ethnic and religious identities, rather than the failure of perfectly placed state borders to alleviate tension between them, explains much of violence in the Middle East today. Blaming imperialism is usually sound politics and good comedy. But in this case, focusing on bad borders risks taking perpetual identity-based violence as a given, resulting in policies that ultimately exacerbate the conflicts they aim to solve.”