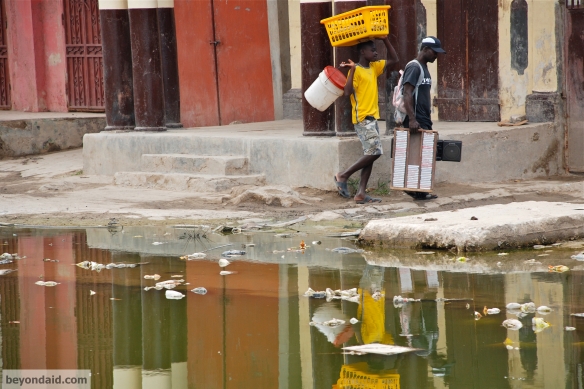 Earth Overshoot Day
The World Wildlife Fund’s Carter Roberts writes on the day that “humanity’s demand for natural resources exceeds the earth’s ability to renew them in a year” that some countries bear far more responsibility than others for our “ecological overdraft”:

“The per capita ecological footprint of high-income nations dwarfs that of low- and middle-income countries. The footprint of a typical American is ten times that of a typical resident of an African nation. China’s per capita footprint is smaller than those of countries in Europe and North America but still exceeds the resources that are available per person worldwide. In all, more than 80 percent of the world’s population lives in countries that use more than their own ecosystems can renew. Today’s Japan requires 7.1 Japans to support itself, Italy needs 4 Italys, and Egypt needs about 2.5 Egypts.”

Setting an example
Inter Press Service reports that Norway’s external audit of debts owed by poor countries to the Scandanavian nation represents “the first concrete use of the principles promoting responsible sovereign lending and borrowing”:

“The investigation, by Deloitte, the financial services firm, looked at aid packages offered to developing countries since the 1970s. Auditors were tasked with studying whether the deals, mostly concessional trade agreements, complied with national guidelines and newly established international principles.
…
Jubilee USA has called on other countries, particularly the G20, to follow Norway’s example, conducting transparent debt audits to allow the public and civil society to see how decades of loans have been made. Given the data, multiple groups have also urged Norway to cancel some debts.”

No act of God
Charanya Krishnaswami, co-author of a Yale University report on Haiti’s cholera epidemic, argues that the UN’s refusal to admit responsibility for the outbreak “plays into a dangerous conception of Haiti as pathology”:

“Why does this matter? The damage has been done; isn’t the U.N. correct to focus on its plan to eradicate cholera by 2022 instead of dwelling on what happened in 2010? Funding and implementing this plan will, critically, prevent future harm. But it will not address the harm that has already befallen so many victims—the men, women, and children who died or lost loved ones in a profoundly senseless tragedy. Every sidestep by the U.N. denies Haitians something truly fundamental: their right to be treated as humans who were wronged and are owed redress.”

Partial justice
The Globe and Mail reports that the Canadian Bar Association has described access to justice in Canada as “abysmal”:

“The summary report, released Sunday at the association’s conference in Saskatoon, says there is profoundly unequal access to justice in Canada.
‘Inaccessible justice costs us all, but visits its harshest consequences on the poorest people in our communities,’ says the report.
…
The report says tinkering with the system won’t be enough.
‘The civil justice system is too badly broken for a quick fix. People fall between the cracks at an unacceptable cost. Injustice is too deeply woven into the system’s very structure for piecemeal reforms to make much of a dent,’ it says.”

Gold & dust
The East African reports on the wealth extracted from Tanzania’s gold mines and the poverty that surrounds them:

“Industry analysts and civil society activists have attributed Tanzania’s marginal benefits from its minerals to bad laws and the practices of mining companies.
…
‘In the current regime, mining companies are free to come and negotiate with the government without following proper channels, which is not proper if the public is to benefit from its natural resources,’ [Publish What You Pay’s Bubelwa] Kaiza told The EastAfrican.
…
In any case, the new law, whose implementation effectively began last year, does not apply retrospectively. So, ‘existing gold mines remain governed by the generous fiscal terms and tax stabilisation clauses outlined in individual mineral development agreements,’ notes The One Billion Dollar Question, a 2012 report about the magnitude of tax revenue losses in Tanzania.”

Swedish solidarity
The BBC reports that women across Sweden are putting on headscarves in protest over an attack against a pregnant Muslim woman, “apparently for wearing a veil”:

“Using the hashtag #hijabuppropet (hijab outcry) a number of women across Sweden published pictures of themselves on Twitter and other social media websites on Monday.
Among the protesters were lawmakers Asa Romson and Veronica Palm, and also TV host Gina Dirawi.
The campaigners said they wanted to draw attention to the ‘discrimination that affects Muslim women’ in Sweden.”

The top 0.01%
The Institute for Policy Studies’ Sam Pizzigati asks how it is that democracy allows such high levels of inequality in the US:

“Over 40 percent of the contributions to American political campaigns are now emanating from this super-rich elite strata.
In the 1980s, campaign contributions from the top 0.01 percent roughly equaled the campaign contributions from all of organized labor. In 2012, note political scientists [Stanford’s Adam Bonica, Princeton’s Nolan McCarty, Keith Poole from the University of Georgia, and New York University’s Howard Rosenthal] in their new analysis, America’s top 0.01 percent all by themselves ‘outspent labor by more than a 4:1 margin.’
Donors in this top 0.01 percent, their analysis adds, ‘give pretty evenly to Democrats and Republicans’ — and they get a pretty good return on their investment. Both ‘Democrats as well as Republicans,’ the four analysts observe, have come to ‘rely on big donors.’
…
Conventional economists, the four analysts add, tend to ascribe rising inequality to broad trends like globalization and technological change — and ignore the political decisions that determine how these trends play out in real life.”

Change of heart
The Huffington Post has published a Q&A with Tunisian activist Amina Sboui, in which she repudiates FEMEN, the group whose name she recently painted on a wall, landing her in prison for 10 weeks:

“And then, I don’t want my name to be associated with an Islamophobic organization. I did not appreciate the action taken by the girls shouting ‘Amina Akbar, Femen Akbar’ in front of the Tunisian embassy in France, or when they burned the black Tawhid flag in front of a mosque in Paris. These actions offended many Muslims and many of my friends. We must respect everyone’s religion.”