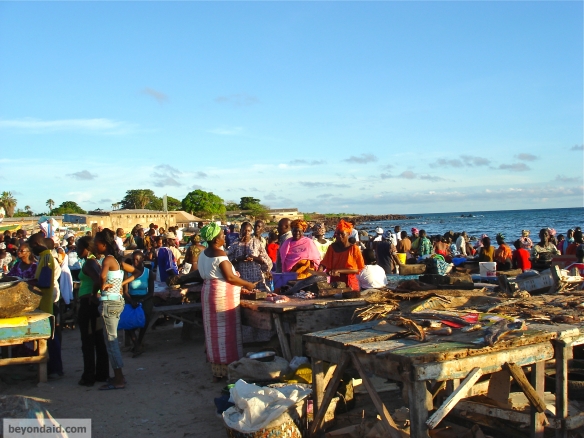 US President Barack Obama has arrived in the Senegalese capital Dakar for the first leg of a three-country African tour. During his only other visit to the continent in July 2009, he delivered what the Guardian called a “tough speech” in which he told Africans to stop blaming others for historical wrongs and to sort out their own problems: “You can conquer disease, and end conflicts, and make change from the bottom up. You can do that. Yes you can…But these things can only be done if all of you take responsibility for your future.”
No one should doubt that Africans are capable of great things. But the president’s message might have been more compelling had he given a similar lecture to rich countries concerning contemporary wrongs. The following is an unpublished piece written in the days following Obama’s Accra speech and the G8 summit in L’Aquila, Italy. It may be a little silly and the facts are four years old, but its central point remains relevant in a world where “winning the future” is deemed a noble ambition.

As a citizen of a G8 country, I am hurt. Where is our pep talk, Mr. President?

It seems unfair that Africans should get all your attention when you take on the scourge of corruption, as you did in Ghana over the weekend. Sure, they have had some legendarily corrupt leaders. When Gabon’s Omar Bongo died last month after four decades in power, he reportedly left behind 45 French homes and a fleet of expensive sports cars. And of course, there was Jean-Bedel Bokassa, Mobutu Sese Seko and Sani Abacha.

But you sell us short. We are the ones with many of the companies and financial institutions that make such personal wealth possible. If only you had chosen last week’s L’Aquila summit to treat our leaders and us to one of your edifying talks, peppered with those personalized anecdotes you use to such rhetorical effect. Like Germany’s Siemens who recently paid over a billion dollars in fines for bribing government officials in a number of countries, you would have said. Or Canada’s Acres International whom a Lesotho court convicted of paying bribes not so long ago.

America may have had some spectacular corruption scandals in recent years, but your country has something to teach the rest of us about cracking down on bribing foreign officials. You could have told us how the United States enacted legislation criminalizing such practices more than 30 years ago, when many rich countries still allowed their companies to write off foreign bribery as a tax-deductible business expense. And how your country, realizing that it was now at a competitive disadvantage, convinced the members of the Organisation for Economic Co-operation and Development to sign onto an anti-bribery convention in 1997, thereby forcing them to change their own laws.

And you could have told us – softly, gently – of your disappointment that Germany is the only other G8 member doing anywhere near enough to enforce that convention, according to a Transparency International report released last month.

At that point, speaking as frankly as you did in Accra, you might have turned your attention to my country and your biggest trading partner, asking how it is that Transparency International believes there is “little or no enforcement” of the compact in Canada. Why it is that only one corporation has had to pay a fine – $25,000 for trying to corrupt an American customs official – in the 10 years since the agreement came into effect. Why it is only now that Canada is looking to extend the law’s jurisdiction to apply to bribes offered outside the country, surely where most foreign officials are bribed. And why it is the Canadian legislation does not apply to not-for-profit organizations, leaving a massive loophole for the development industry.

It could have been so beautiful. And so much more balanced. We citizens of the rich world understand you feel a special bond towards the continent where your father was born and from which your wife’s and daughters’ ancestors were forcibly removed in chains. But please do not forget about us. Our relationship with Africa did not end with the birth of all those independent nations.

I want you to tell us that my generation will be the first to understand instinctually how the countries that set the rules of the game have to accept some blame for negative outcomes. That it will one day be normal to see the contradiction in a fight against drugs that focuses on the supply side and a fight against corruption that focuses on the demand side. That when we take the baton from the current leaders, we will know development policies designed as though the roots of poverty lie exclusively in poor places make no sense.

Lay it on us, Mr. President. Let us bask in your beautiful, chiding words. Hope, change, responsibility and all the rest. Yes we can.