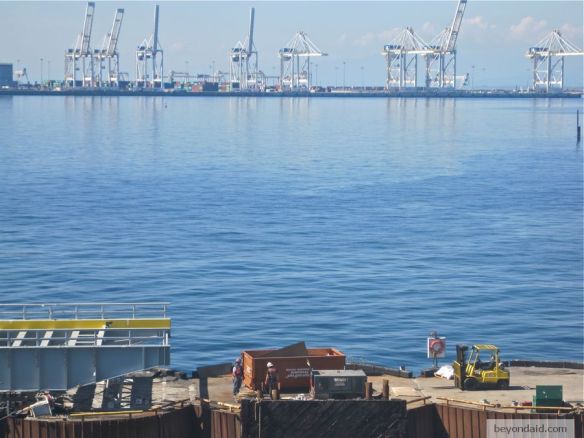 Moment of silence
Following the official announcement that Ethiopian Prime Minister Meles Zenawi is dead, the Center for Global Development’s Owen Barder explains why he is not weighing in on the challenges of the succession:

“Why do you want your analysis of Ethiopian politics to be intermediated by a European? Isn’t that a little bit, well, racist?
…
I want to focus mainly on holding my own government and society to account for our impact on the world.
Our choices make a huge difference to the lives of people in developing countries.  Our policies on trade and corruption affect their economic development; our approach to financial markets and the environment spill over into the lives of people we have never met.  If we choose to use it, we have the power to lift people out of poverty by giving more aid, and managing it better.
These issues interest me most because they are properly mine to help fix.”

“Mining has been central to the history of repression in South Africa. Mining made Sandton to be Sandton (a district in Johannesburg known as “Africa’s richest square mile”) and the Bantustans of the Eastern Cape to be the desolate places that they still are. Mining in South Africa also made the elites in England rich by exploiting workers in South Africa. You cannot understand why the rural Eastern Cape is poor without understanding why Sandton and the City of London are rich.”

Chemical threats
The Los Angeles Times reports that US President Barack Obama has opened the door for an American military intervention in Syria, saying the Assad regime’s use or movement of chemical weapons would be a “red line”:

“Obama said he has not ‘at this point’ ordered the U.S. military into action. But he said his administration has ‘put together a range of contingency plans,’ including a response if it appears Assad’s forces are preparing to use poison gas or biological weapons in a bid to stay in power.”

Somali roadmap
Roland Marchal of the National Centre for Scientific Research (CNRS) argues that current attempts by foreign powers to restore stability in Somalia, which has just inaugurated a new parliament, are likely to do more harm than good:

“One of the strategic weaknesses of the outgoing transitional Parliament and Government (TFG), set up in 2004, was its lack of popular legitimacy. The new institutions are likely to have no more legitimacy since the whole roadmap process appears to be overly-influenced by foreigners, especially through the United Nations Political Office for Somalia, and by corruption. Shockingly, MP seats can be bought for a few thousand US dollars.
Though the country is still at war and public debates are nearly impossible, the USA and UK pushed for a new constitution to be endorsed. The Constitutional Assembly was left with no choice but to endorse a draft constitution (at a cost of $13m) since it would be implemented anyway as a new Provisional Constitution. Many elders saw that debate on the Constitution as very divisive and the whole exercise illegitimate, rather than being a basis to express shared values.”

Anti-piracy offensive
The BBC reports that an EU committee believes Europe “must” continue to use warships off the coast of Somalia in order to defeat the region’s pirates:

“Its chairman, Liberal Democrat Lord Teverson, said: ‘Operation Atalanta has clearly made real progress in reducing the threat of Somali piracy. However if the situation is to continue to improve it is important the pirates know the international commitment to stop their activities is real and ongoing.
‘To ensure this Operation Atalanta should now have its remit extended beyond 2014.’ ”

Dirty work
The Mindanao Examiner reports that a Philippine general has rejected a Canadian mining company’s version of events that left one smallscale miner dead and six others injured:

“[Major General Ricardo Rainier Cruz III] said police filed criminal charges against 7 private security guards working for [TVI Resources Development].
‘Using the pieces of evidence gathered to include accounts from several witnesses and sworn statements of the complainants, cases of two counts frustrated murder and six for attempted murder have been filed at a local court against the seven security guards of the TVIRD who are all under the Big JR private security agency,’ Cruz said in a statement sent to The Manila Times.
Cruz branded the security guards as members of a ‘pseudo-organization employed by the said mining company to execute dirty works’ commonly known among miners in Balabag area as ‘K9’.”

Bad tenants
The Daily Guide reports that mining companies operating in Ghana are not paying their dues to the country’s government or its people:

“Though the mining companies continue to exploit the nation’s non renewable resources they have failed to pay the paltry sum of GH50p annually for ground rent per acre of land under concessions entrusted to them.
…
The operations of two multinationals in the last five years is reported to have displaced 50,000 people in a number of communities where the big companies work, destroying their farms, homes and livelihood.
The major concern of people, who have suffered this plight, has been over the payment of low compensations for their loss.
Mining companies pay one-off compensation of about GH¢20.00 for a cocoa tree, which may not cover the farmer’s earnings from a cocoa tree for one year.
Their activities deny farmers of their earnings from their long-term investment in cocoa, which has economic life of about 50 to 60 years.
The unpaid compensations translate into subsidies that the poor farmers provide to the multinational companies.”

“Perhaps the most fantastic aspect of this festival was the fact that it had categorically discarded the ghastly colonial concoction code-named ‘the Middle East’ and termed it appropriately ‘West Asia’. That very simple turn of phrase had liberated a whole habitat of humanity from a colonial legacy.
…
We as Asians or Arabs are no longer located to the East of a colonial officer who once drew an imaginary line to his East and called its vicinities the middle, near, or far of his East. Asia has long awaited its moment of full self-recognition, as has Africa – and, by extension, Latin America. Upon this axis, there is no longer any ‘West’, nor, a fortiori, any false hostility between ‘the East and the West’. Transcending these destabilising metaphors is the threshold of our emerging liberation geography. ”