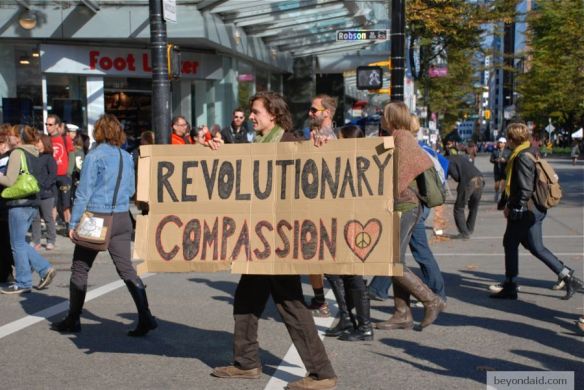 State of the planet
Agence France-Presse summarizes the World Wildlife Federation’s new Living Planet Report, which says high-income countries have five times the ecological footprint of their poorer counterparts.
“The survey, compiled every two years, reported an average 30 percent decrease in biodiversity since 1970, rising to 60 percent in the hardest-hit tropical regions.  The decline has been most rapid in lower income countries, ‘demonstrating how the poorest and most vulnerable nations are subsidising the lifestyles of wealthier countries,’ said WWF.”

Corporate power
The Guardian reports on a legal dispute between a UK hedge fund and an Indian state-controlled coal company, which has some observers asking if the “terms of trade and investment are skewed” in a way that harms poor countries and poor people.
“ ‘What this case really illustrates is how far global trade and investment rules have gone in increasing the power and influence of companies,’ said Ruth Bergan, co-ordinator for the Trade Justice Movement. ‘Under bilateral investment treaties, companies have been given the right to sue states, not in national courts, whether in host or home countries, but in international arbitration centres, based at the International Chamber of Commerce, the World Bank, and a handful of other often highly secretive centres.’ ”

Terror double-standard
The Atlantic’s John Hudson suggests US ambivalence toward assassinations of Iranian nuclear scientists is evidence of America’s “flexible definition” of terrorism.
“The Obama administration is moving to delist an Iranian dissident group from the State Department terrorism list, which, as recently as January, reportedly detonated a magnetic bomb under the car of an Iranian scientist. Perhaps unintentionally, the message the move would send appears to be: This activity is OK as long as it’s against Iran.”

Rio+20 deadlock
Inter Press Service reports that two weeks of preparatory talks for next month’s Rio+20 summit have “failed to reach consensus on a global plan of action.”
“ ‘Let us be frank,’ the [UN Conference on Sustainable Development] secretary general Sha Zukang said, ‘the negotiating text is a far cry from the focused political document called for by the general assembly.’ Zukang said the objective should be to arrive in Rio ‘with at least 90% of the text ready, and only the most difficult 10% left to be negotiated there at the highest political levels’.
However, a statement released by a coalition of international NGOs warned that Rio+20 ‘looks set to add almost nothing to global efforts to deliver sustainable development’. ‘Too many governments are using or allowing the talks to undermine established human rights and agreed principles such as equity, precaution and polluter pays,’ it said.”

Western gender problems
UC Santa Barbara’s Hilal Elver argues that a recent Foreign Policy issue on the plight of women around the world failed to acknowledge that gender equality does not exist in Western countries either.
“Anthropologists use the term ‘native informants’ to identify the witness of insiders. Giving a platform to Muslim women writers critical of Islam has also become a very popular tactic in Europe. These commentators claim to speak from bitter experience about how Islam is bad for women. This makes the European public feel comfortable when they adopt public policies against Islamic practices.
…
FP only pointed to the United States as a good example, how Secretary of State Hillary Clinton works on women’s issues while shaping US foreign policy. I am sure she has many things to say about the United States, if FP would ask, about the relevance of her gender to her unsuccessful presidential campaign. But, this is not what readers seem to care about. It would have been much more impressive and acceptable if such critical issues were presented not only for selected adversary countries and cultures, and if there was not exhibited such bias and partisanship.”

Show trial
The University of Ottawa’s Peter Showler writes about the lack of “sincerity” during a parliamentary investigation into the Canadian government’s proposed changes to national refugee laws.
“[The proceedings] became more show trial than law making. The witnesses called by the Conservatives repeated their versions of the government storyline: Canada is inundated with bogus refugees; we need fast decisions to get rid of the fraudulent claimants; they come here for welfare, not protection; putting smuggled passengers in prison for a year is the only way to stop the smugglers who are evil. The Conservative members rarely asked real questions of their witnesses. They repeated the government litanies about Canada’s generosity and burdens on the Canadian taxpayer followed by ‘would you agree?’
…
There is an awful, disembodied sensation in watching a show trial. It is the sensation of observing a slow-motion accident through a plate-glass window. Something horrible and inevitable is happening and there is nothing you can do to stop it. You realize the outcome has been decided already. The proceedings became a theatre piece where everyone played their part.”