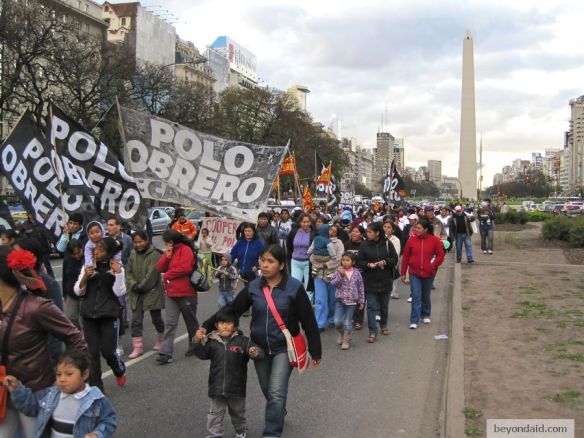 May Day
The Christian Science Monitor offers an overview of May Day demonstrations around the world.
“In Argentina, small explosion went off outside the EU headquarters in Buenos Aires before dawn, breaking a few windows, but there were no injuries and no one was arrested.
Earlier, thousands of workers protested in the Philippines, Indonesia, Taiwan and other Asian nations, demanding wage hikes. They said their take-home pay could not keep up with rising food, energy and housing prices and school fees.
An unemployed father of six set himself on fire in southern Pakistan in an apparent attempt to kill himself because he was mired in poverty, according to police officer Nek Mohammed.”

Food price fear
The Financial Times reports that “industry experts” are predicting food prices will continue to rise over the next two years, though “the surge is unlikely to mirror” the 2007-08 crisis that saw rioting in cities around the world.
“The cost of wheat and rice, the two most important agricultural commodities for global food security because of their status as a staple for billions of people in southern Asia and sub-Saharan Africa, remains stable thanks in large part to bumper crops over the past few years.
…
Instead, the main concern centres on the price of oilseeds, such as soyabeans, rapeseed and canola, and corn.”

Short-lived peace
The Bureau of Investigative Journalism provides a roundup of US drone strikes in Pakistan, Yemen and Somalia during April.
“CIA drone strikes were on hold for most of the month in Pakistan, as Islamabad continued to insist that the US end the strikes after eight years of bombing.
…
On April 29 the pause ended when a drone attacked a former school in Miranshah, North Waziristan. Up to six alleged ‘foreign’ militants reportedly died. Pakistan condemned the attack in particularly strong terms, describing it as ‘in total contravention of international law and established norms of interstate relations.’ ”

Unmanned outlaws
Amnesty International’s Tom Parker contests the Obama administration’s claims that drones kill 40 militants for every civilian casualty and that their use is legal.
“In short, we know that [White House counterterrorism adviser John] Brennan’s 40-to-1 metric was, at best, wrong and, at worst, a deliberate falsehood.
We know that drones do kill militants but they also kill innocent civilians.
We know that they kill both of them outside the framework of any recognized international law.
We also know that yesterday’s speech, which masqueraded as an exercise in transparency, was in fact anything but.”

Wal-Mart vote
The New York Times reports that New York City’s pension funds have announced their intention to vote against five Wal-Mart directors seeking re-election at next month’s annual shareholder meeting, due to an alleged bribery cover-up in Mexico.
“ ‘In its relentless drive for profit and expansion, Wal-Mart has paid millions to settle charges that it violated child labor laws and exploited immigrants,’ [New York City comptroller John C. Liu] said Monday, in announcing the decision to vote against the company’s directors. ‘Now we learn that not only did Wal-Mart allegedly bribe its way through Mexico, but may have tried to cover up the corruption. A select few Wal-Mart executives may benefit in the short term, but the company, its share owners and everyone else lose in the long run.’ ”

Geography of domination
Columbia University’s Hamid Dabashi pleads for the US and its allies to step back and give former UN Secretary General Kofi Annan a chance to find a diplomatic resolution to the violence in Syria.
“[Annan] is the only one in a position to give the ruling regime (not just Bashar al-Assad) a way out of this bloody cul de sac. Unconditional surrender should never be the ruling paradigms in these or any other conflict resolution – not because Gaddafi then or Assad now deserves a face-saving strategy, but because Libyan and Syrian people need it for their future.
What ultimately prevents that possibility is not just the quagmire of violence in Syria. It is the imaginative geography of world politics that has historically written Asia, Africa, and Latin America out of the vital decisions affecting the globe. The US and EU have assumed disproportionate power of decision-making in global affairs and the UN is simply a diplomatic extension of their warmongerings. It is that grotesque geography of imperial domination that must be once and for all dismantled for the world determined to liberate itself, to begin to see itself.”

Agrarian crisis
The Research Foundation for Science, Technology and Ecology’s Vandana Shiva argues the orthodox understanding of the economic concept of productivity lies at the root of today’s agricultural, ecological and unemployment crises.
“An artificial ‘production boundary’ was created to measure Gross Domestic Product (GDP). The production boundary defined work and production for sustenance as non-production and non-work – ‘if you produce what you consume, then you don’t produce’. In one fell swoop, nature’s work in providing goods and services disappeared. The production and work of sustenance economies disappeared, the work of hundreds of millions of women disappeared.
…
The false measure of productivity selects one output from diverse outputs – the single commodity to be produced for the market, and one input from diverse inputs – labour.”

Change of diet
In a Q&A with Inter Press Service, Worldwatch Institute’s Danielle Nierenberg calls for “a restructuring of the entire food system.”
“Factory farming or concentrated operations, this agricultural system really started here in the U.S. and in Europe, (and) is now spreading to the Philippines, Sub-Saharan Africa, South Asia. The environmental, public health and animal welfare impact of this is really extreme. You have huge amounts of waste that can’t be utilised by farmlands, surface fertiliser is becoming toxic waste, there’s tropical water pollution, surface water pollution.
…
We really need to make sure that agriculture is something that sustains and not just some extractive industry.”

Insouciance of war
Author Daniel Richler laments the extent to which people living in a “nation at war” can be almost totally unaffected by the horrors playing out on distant battlefields.
“Is it arrogant to feel this way? To want, in one of these moments, the hockey crowd with their plastic mugs of beer and their popcorn standing for the troops, the families in attendance along the ‘Highway of Heroes’ or others at a policeman’s funeral not to stand, in silence, hands over their hearts in postures received from the movies, to wail inconsolably and furiously – and to riot, damn it, for lost lives rather than a sports result? That would bust the cliché – once, at least, before that scene, too, of thousands outraged at war’s stupidity became a standard part of the war story’s tired repertoire and was repeated, again.”