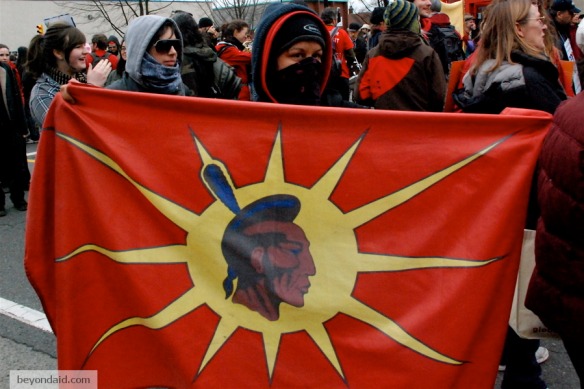 Politics of inequality
Oxfam’s Caroline Pearce writes about the NGO’s new report that suggests inequality is on the rise in the majority of G20 countries.
“Crucially, what the report does not find is any link between particular stages of development and levels of or changes in inequality, casting doubt on those who argue that inequality is an inevitable stage along the way to development. Rather, inequality is a matter of political choices, and now the onus is on the G20 to make the right ones. According to new data from the new Standardized World Income Inequality Database, just four G20 countries (Korea, Brazil, Mexico and Argentina) have reduced income inequality in the last 20 years (see chart), and some with only modest levels of growth. Even these are not unambiguous success stories: in three, initial inequality was so high that decades’ more progress would still be necessary to bring them to levels seen in, for example, Pakistan, let alone in a country like Sweden. The exception is Korea, which grew to high-income status while reducing already comparatively low levels of income inequality. The others, along with the rest of the G20 club, face serious challenges in living up to G20 promises about ‘inclusive growth’.”

Millennium Consumption Goals
The UK Youth Climate Coalition’s Casper ter Kuile wonders how the world’s power brokers, who are about to hold their annual get-together in Davos, will respond to the new inequality data.
“The data also reveals that unlike the G20, in most low-income countries, inequality is falling, and levels of inequality are converging towards those of the G20. Perhaps time to revisit that idea of Millennium Consumption Goals? Or set up The Spirit Level reading groups in the Swiss mountains?”

Hedge fund human rights
The Independent reports hedge funds holding large amounts of Greek debt are going to try to protect their finances via the European Court of Human Rights.
“The funds have baulked at the idea of negotiating a settlement with the indebted country. Now, in a move likely to anger millions of Greeks facing austerity measures, fund managers are considering a fight against what they believe would be a violation of human rights law, arguing that their rights to property would be infringed by a write-down of Greek debt.”

Aboriginal rights
The Globe and Mail reports a prominent First Nations leader is calling for constitutional clarification on the rights of Canada’s indigenous people in the wake of the recent Attawapiskat crisis that drew attention to water and housing issues in Aboriginal communities.
“Many first nations leaders say the key to resolving all of these matters is an equitable sharing of resource rights, not just on reserves, but across all of their traditional lands. And, for the most part, the provinces and territories have control over those resources, whether it is diamonds in Ontario, oil in Alberta or minerals in Manitoba.”

Economics of place
On the heels of the US government’s announcement that Haitians will now be eligible to apply for temporary H-2 work visas, the Center for Global Development’s Michael Clemens writes about his first encounter with the economic significance of one’s place of birth.
“My interest in labor mobility as a poverty reduction tool dates to my boyhood, when I spent a summer in Mexico. I was astonished to discover that the man who fixed our toilet in Mexico City earned just a small fraction of what a man doing an identical job in the United States would earn. How could that be? How could location matter so much more than talent, effort, or character?”

Credit inequality
PIMCO’s Mohamed El-Erian argues the world economy has “a nasty plumbing problem” which is leading to dangerous inequality in access to credit.
“From every angle, the extremity of this state of affairs – in which those with access to credit do not need it, and those who do cannot get it – is highly problematic. If left unattended, it leads to a gradual, and then accelerated, renewed deleveraging of the economic system, with the highest first-round costs – a longer unemployment and growth crisis – borne disproportionately by those least able to suffer them. In the next round, as the system slowly implodes, even those with healthy balance sheets would be impacted, accelerating their disengagement from a deleveraging world economy.
All of this slows social mobility, tears already-stretched safety nets, worsens inequality, and accentuates genuine concerns about the functioning and sustainability of today’s global economic system.”

Responsible capitalism
Ekklesia’s Jonathan Bartley argues the changes to the economic system being advocated by political leaders fall well short of the “fundamental” reforms that are needed.
“Responsible capitalism is an oxymoron akin to ‘well-mannered war’ or ‘friendly famine’. But to begin to acknowledge that, the values of the system itself must be questioned not just the ethical or regulatory framework in which it operates.”

Horizontal accountability
¥OURWORLD’s Reinier van Hoffen offers his thoughts on how to improve democracy, using as his starting point a recent Beyond Aid article that argued finding serious solutions to global problems such as climate change and world hunger will require a system of democratic governance that transcends states.
“However, he also acknowledges that such a centralization of power will have some repercussions and challenges that he does not dwell on in his article. I want to take it from there and while agreeing with his analysis about the state in its current shape, I have a sense that the solutions are to be found in the opposite direction and not necessarily require a replacement of the political representation model that underpins the state. It rather requires a transformation of it, renewing the social contract it requires to function properly. Firstly the focus should not be on the power structure but rather on the power base. Secondly, the means by which a new form of governance has to come into existence is by a transformation of the current governance structure.”