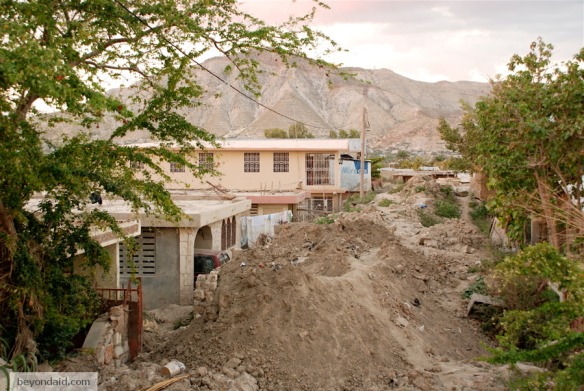 Climate loopholes
The Guardian reports that India is taking wealthy countries to task at the climate change talks in Durban, insisting they need to get serious about cutting emissions.
“To bolster its argument that rich countries must do more, India referred to a recent study by the Stockholm Environment Institute of the pledges made last year in Cancún by all countries. It shows that developing countries are pledging 30%-50% more cuts than the rich, and that the rich may be able to avoid taking any action whatever to meet their pledges by taking advantage of accounting loopholes.
Sivan Kartha and Peter Erickson of the Stockholm Environment Institute (SEI) said: ‘Developing countries pledges amount to more absolute mitigation than all developed countries. Unless accounting rules for Annex 1 countries are made more stringent, then Annex 1 countries will be able to formally comply with their pledges with very little actual mitigation and possibly none at all.’”

Climate debt
The Inter Press Service reports on opposition in Nepal to the government’s acceptance of millions of dollars in loans for climate change mitigation projects.
“‘Nepal has one of the lowest greenhouse gas emission levels in the world due to its low industrialisation,’ [secretary of the All-Nepal Peasants’ Federation, Hari] Parajuli adds. ‘It also has forests covering nearly 40 percent of its land. Yet, the developed countries that cause pollution are now seeking to make Nepal take loans and pay them interest.’
Parajuli says the protests are also against the involvement of the World Bank.
‘We don’t regard it positively,’ he says. ‘It is not service-oriented but works for profit.’”

Naming land grabbers
A new Oakland Institute report argues that at while the EU and US give food and emergency aid to victims of famine and war, their development and energy policies harm Africa’s people and environment.
“Development agencies including USAID and the World Bank Group are often the architects of these [unregulated land] deals that promise benefits for Africans but fail to deliver. Furthermore, the research shows that US and EU energy policies that tout the benefits of agrofuels and carbon credits–key elements of these land deals–are actually making climate change a bigger problem.
…
[The Oakland Institute’s Anuradha] Mittal noted that people can follow the supply chain to identify the bad actors–who claim benefits for Africa but seldom deliver: so-called developers who determine how land will be used (such as Iowa-based based AgriSol Energy and Texas-based Nile Trading Development), companies that grow non-food crops on the land (including Sun Biofuels and Addax Bioenergy), and groups that buy up agrofuels and timber (including major western airlines such as Lufthansa).”

Food speculation
A new report by the Centre for Research on Multinational Corporations (SOMO) argues for regulation of “purely financial speculation in commodity derivatives markets” that has spiralled out of control in recent years and is contributing to soaring food prices.
“SOMO calls on European governments to respect the precautionary principle enshrined in the Lisbon Treaty and to act decisively to bring back financial speculation in commodity derivatives markets. The European Parliament currently has an opportunity to do just this by strengthening the proposed Markets in Financial Instruments Directive and Regulation (MiFID and MiFIR).”

Calling out Soros
The FCPA Professor, the alter ego of Butler University’s Mike Koehler, accuses billionaire philanthropist George Soros of not walking his talk on foreign bribery.
“If the Soros funded Open Society Foundations believe that all corporations involved in [a Foreign Corrupt Practices Act] enforcement action have a “bad or wrongful purpose,” that current standards “simply do not permit successful prosecution of innocent, mistaken or unknowing persons” and that companies involved in an FCPA enforcement action are corrupt, then why does Soros Fund Management LLC invest in so many FCPA violators or companies subject to FCPA scrutiny?
The Fund’s recent 13F filing (in a 13F filing institutional investment managers disclose fund holdings) indicates substantial investments in the following companies that have recently resolved FCPA enforcement actions or are otherwise the subject of current FCPA scrutiny:  Alliance One International, El Paso, Flowserve, Halliburton, Hewlett-Packard, KBR, Motorola Solutions, Parker Drilling, Pfizer, Tidewater, Weatherford International, Tyco International, and Lyondellbasell Industries.”

Drone boom
The Electronic Frontier Foundation’s Trevor Timm argues that, with the unmanned aircraft market worth nearly $100 billion across more than 50 countries, the debate about drones needs to extend well beyond their use or misuse by the US military.
“Whether they are being used for surveillance or all-out combat, drones will soon pose serious risks for all of the world’s citizens. They can offer governments, police departments, or private citizens unprecedented capabilities for spying, and given their security vulnerabilities, the potential consequences could be endless.”

Treating symptoms
Dean Chahim, a University of Washington student and co-founder of the Critical Development Forum, calls on young people to engage in more political activism at home in order to change the global order.
“My generation has been sold a dogma of the individual as the solution to inequality and poverty. The older generation glorifies our individual achievements as “social entrepreneurs” while brushing the total failure of our economic system under the rug. Is it any wonder our youth think that if they start enough NGOs, go abroad two weeks at a time, design a new widget, or send a few bras – all will be well in the world?”

Spam tax
Oxfam’s Duncan Green mines the comments section of a Financial Times blog to provide a “lovely analogy” for a proposed financial transaction tax (Tobin/Robin Hood tax).
“Think of spam email: when sending emails is essentially free, sending out millions of spam emails can be profitable even if a fraction of respondents would take the bait. But if you had to pay even a nominal charge, even less than a penny, per email sent, that ‘business model’ would essentially become loss making in many cases. The Tobin tax would have a similar effect on a lot of this ‘phantom liquidity’ we get across many markets through high frequency traders – who, after all, are playing a zero sum game mostly, with their profits essentially being losses for a lot of other players. A small transaction cost might just be enough to discourage a lot of this socially useless activity.”