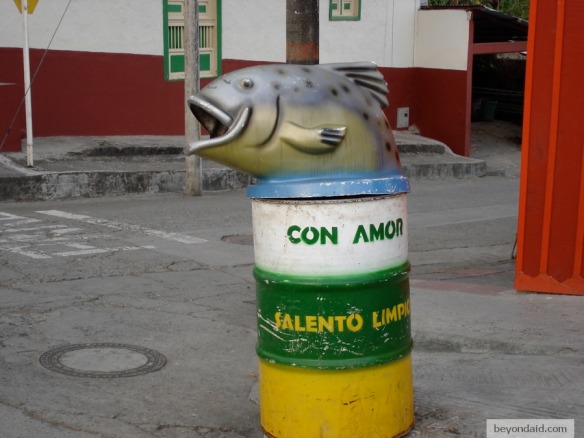 Global inequality
The Overseas Development Institute’s Jonathan Glennie points out that many of Europe’s and America’s Occupy demonstrators are actually part of the global 1% and that the inequality between countries is worse than it is within countries.
“If redistribution at a national level requires a strongly interventionist state, doesn’t that imply that something similar is required globally if we hope to contain global inequality? Such a plan would be laughed at by those who know the inner workings of the UN, and who recognise the nationalist instinct of politicians and voters. It is ironic that as knowledge about and empathy with the rest of the world has increased in the 20th century, through a revolution in communications, so has global inequality. One might have hoped for the opposite.
It is hard to see how global inequality can be contained without a shift in the mindset, cemented by centuries of traditional politics and nationalism, that favours the state you are born in over the world you want to live in.”

Bush and Blair on trial
Princeton University’s Richard Falk writes about a Malaysian tribunal’s non-enforceable conviction of former US president George W. Bush and former British prime minister Tony Blair for crimes against humanity and genocide during the Iraq War.
“The world system of states and institutions was unwilling to look a particular set of facts in the eye, and respond effectively to what many qualified and concerned persons believed to be a gross injustice. In this regard, there was an intense ethical and political motivation behind these civil society initiatives that invoked the authority of law. But do these initiatives really qualify as ‘law’? A response to such a question depends on whether the formal procedures of sovereign states, and their indirect progeny – international institutions – are given a monopoly over the legal administration of justice. I would side with those that believe that people are the ultimate source of legal authority, and have the right to act on their own when governmental procedures, as in these situations, are so inhibited by geopolitics that they fail to address severe violations of international law.”

A human approach to asylum-seekers
The UN High Commissioner for Human Rights Navi Pillay has praised Australia for announcing it will no longer send all undocumented migrants arriving by boat to mandatory detention centres.
“I am pleased to see this latest shift in policy, bringing in individual assessments of asylum seekers for release into the community,” she said. “I welcome these steps towards a more human approach to asylum-seekers in Australia which can only help to strengthen the tolerance and understanding necessary in a modern multicultural society.”

Doing the cartels’ laundry
The Los Angeles Times reports on the virtual impunity with which international banks have helped Mexican drug cartels launder billions of dollars.
“‘Wachovia’s blatant disregard for our banking laws gave international cocaine cartels a virtual carte blanche to finance their operations,” U.S. Atty. Jeffrey H. Sloman said in announcing the case last year, hailed at the time by authorities as one of the most significant in stopping dirty money from contaminating the U.S. financial system.
Wachovia paid the $160 million in what is called a deferred-prosecution agreement; no one went to prison, and the fines represented a tiny fraction of the [$420 billion] the bank had filtered. In court documents cited by the U.S. Drug Enforcement Administration, Wachovia acknowledged serious lapses.”

There will be blood
The Inter Press Service reports on an unfolding investigation in Sweden over allegations petroleum giant Lundin Oil was involved in human rights violations committed in South Sudan during the civil war that preceded independence.
“[Reverend James] Ninrew said the brutal and systematic nature of the government’s operations in advance of the oil industry was obvious to anyone in the area. The government would begin by indiscriminant bombing, driving many from their homes. This would be followed by helicopter gunships flying low in order to attack those that remained.
‘The third step was sending ground troops coming in vehicles and coming on foot to make sure no more people were there,’ said Ninrew.
Soldiers would then establish posts just beyond the area they wanted to control, he said. After that, the machinery and the surveyors would arrive. Once they were done their work, the pattern would be repeated as the oil company expanded into territory falling under its concession.”

The Millennium Villages don’t work
The Center for Global Development’s Michael Clemens writes about a new independent assessment – the first of its kind – of the Millennium Villages Project, which suggests the much-hyped experiment has had little impact on household income despite spending nearly 100 percent of local income per capita.
“While [Tilburg University’s Bernadette] Wanjala and [Radboud University’s Roldan] Muradian find that the project caused a 70% increase in agricultural productivity among the treated households, tending to increase household income, it also caused less diversification of household economic activity into profitable non-farm employment, tending to decrease household income. These countervailing effects are precisely what one might expect from a large and intensive subsidy to agricultural activity. On balance, households that received this large and intensive intervention have no more income today than households that did not receive the intervention.”

Or do they?
Yale University’s Chris Blattman takes issue with many of the statistical methods of the new study and thinks the evidence presented may in fact suggest increases in income, though he is careful to add he does not necessarily buy into the Millennium Villages Project’s basic assumption that “the whole of poverty alleviation is greater than the sum of its parts.”
“My own theory of poverty is actually the opposite: there are diminishing marginal returns to aid in a single village. I believe in the possibility of increasing returns and complementarities, but mainly through broad, national institutional and technological change. I’m personally not convinced real poverty traps exist, or can be overcome, at the household or village level.”