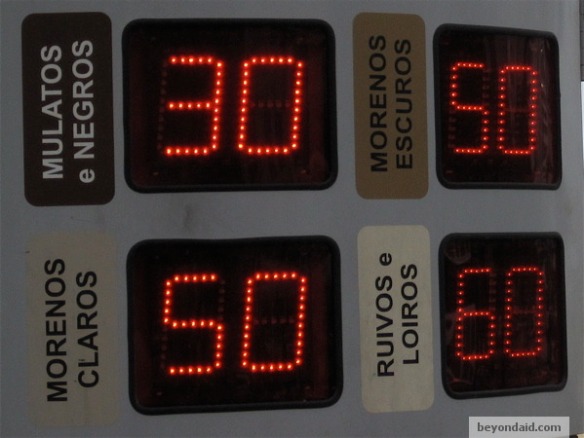 Commitment to development
The Center for Global Development’s David Roodman presents his organization’s latest Commitment to Development Index which assesses donor countries based on policies that go beyond aid levels, but he expresses concern over the US’s skyrocketing ranking as a result of its increased number of troops in Afghanistan.
“The approach in the security component to military activities is shaped by three ideas: some interventions, such as the NATO-led war to stop the serves from potentially committing genocide in Bosnia, seem like contributions to development; other interventions are much harder to defend; and the rule used to distinguish between the two kinds should be mechanical, to limit bias—”objective,” if you will. It was Michael O’Hanlon who years ago suggested the presence-of-an-international-mandate criterion. (As mentioned, the Afghanistan war has such a mandate.) But even O’Hanlon argued for exceptions, at the time having Iraq in mind. The Security Council did not sanction the invasion of Iraq, but it did sanction post-invasion activities, so a strict implementation of the criterion would have rewarded the latter. O’Hanlon argued against rewarding the occupation of Iraq since it was so thoroughly motivated by national security rationales, not ‘commitment to development.’”

Private police
The Sydney Morning Herald reports that Indonesian police have admitted to receiving money from US mining giant Freeport-McMoRan to protect the world’s most profitable gold and copper mine in the face of labour unrest.
“Accusing the workers of ‘anarchy’ and threatening a national asset, local police chief Deny Edward Siregar warned the police would take ‘stern action’ if the site of the picket line wasn’t moved by today. Union officials responded by saying they were going nowhere, setting the scene for possibly more violence.
Police spokesman Wachyono defined the foreshadowed ‘stern action’ as ‘opening further negotiations with union management’. However, five striking workers have already been shot dead by police, raising accusations of a heavy-handed and hostile attitude of security personnel towards workers exercising their legal rights to industrial action.
…
‘How can they enforce the law [impartially] if they receive bribes?’ said Samsul Alam Agus, [human rights group] Kontras deputy co-ordinator.”

Private soldiers
The UN News Centre reports that an expert panel is calling for the regulation of the “ever expanding” activities of private military and security companies.
“‘And it is not just governments who take advantage of their services, but also NGOs [non-governmental organizations], private companies and the United Nations,” [Faiza Patel, the current head of the Working Group on the use of mercenaries] added.
For the Working Group, ‘the potential impact of the widespread activities of private military and security companies on human rights means that they cannot be allowed to continue to operate without adequate regulation and mechanisms to ensure accountability.’”

Record deportations
The Inter Press Service reports on the increasingly hostile environment for immigrants in the US, where a million people have been deported since the start of Barack Obama’s presidency.
“The Alabama law [House Bill 56], passed by the state legislature in June 2011, is described as one of the country’s harshest anti-immigrant bills. It requires that police demand identity documents of anyone who they have “reasonable suspicion” to believe is in the country unlawfully, and requires public schools to determine the immigration status of primary and secondary school students, while authorising school officials to report children or parents who may be in the country illegally.
It also establishes penalties, even jail time, for people who hire, rent to or even assist undocumented immigrants, by giving a ride to a neighbour, for instance.”

Toothless watchdog
The CBC reports on the record to date of Canada’s mining watchdog, a position which one critic has described as “a bogus PR job, as a cover for business as usual.”
“In October 2009, the federal government appointed a corporate social responsibility counsellor to probe complaints about Canadian companies committing abuses in developing countries.
The Toronto-based office, however, has only received two complaints in the past two years — one of which was recently dropped because the mining corporation chose not to undergo the voluntary investigation.”

Super companies
Oxfam’s Duncan Green blogs about a new scientific analysis of 43,000 transnational corporations that suggests a group of 147 interconnected companies was “able to control 40 per cent of the entire network.”
“The idea that a few bankers control a large chunk of the global economy might not seem like news to New York’s Occupy Wall Street movement and protesters elsewhere. But the study, by a trio of complex systems theorists at the Swiss Federal Institute of Technology in Zurich, is the first to go beyond ideology to empirically identify such a network of power. It combines the mathematics long used to model natural systems with comprehensive corporate data to map ownership among the world’s transnational corporations (TNCs).”

Global tax rules
ActionAid’s Martin Hearson calls on the G20 to deal with tax havens which cost poor countries three times as much in lost tax revenues as they receive through international assistance.
“ActionAid’s report, Calling Time: Why SABMiller should stop dodging taxes in Africa, demonstrated how one multinational beer company shifts £100 million of profits per year – the taxes on which could educate 250,000 children – out of Africa and into the tax havens of Mauritius, Switzerland and the Netherlands. Capacity building in African tax authorities is important, but without more fundamental reforms to increase transparency and change global tax rules, it will never be enough to prevent this kind of tax dodging.”

Helpful aid
Former Nigerian president Olusegun Obasanjo has called on G20 leaders to help Africa improve its infrastructure while making it clear not all assistance is necessarily helpful.
“The pressure is on how to translate the plan into purposeful action for November and avoid the pitfalls of past efforts – including short-term thinking, destabilizing capital surges, and carbon-heavy construction. Success will be measured by the amount of capital generated, and the number of projects realized, as well as by the extent to which G20 activities complement and synergize existing efforts without supplanting or fragmenting them.”